Last Saturday was the annual running of the Kaibab Monster Cross on the Kaibab plateau.  We had tossed around several incarnations of how to do this one…how it ended up was that I raced, Lynda & the kids explored the North Rim, then the day after the race we switched roles.  It was a blissful, perfect weekend.  We all got home exhausted and smiling.

Carrying on with the year’s theme, I raced SS.  That wasn’t my first choice, but a few days before the event Brendan showed up with the new Siren SS 29er, and I couldn’t resist.  The first ride on it was like a magic carpet…it fits like a glove, is a perfect balance between sharp handling and stable, and even though it’s aluminum it’s more compliant than the Explosif frame.  Go figure.

A picture is worth a million words.  ’nuff said :) 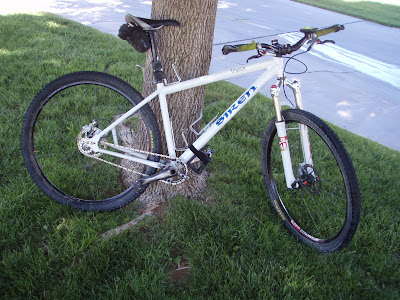 This years was more fun than last year – maybe it’s the SS factor, maybe it’s the slightly cooler weather (or maybe I’m just adapted to heat living in St George), maybe it’s cause I knew what to expect.  For sure last year’s event was affected by the Grand Loop fatigue 2 weeks prior.  In any case, I love racing SS.  It’s easier.  There is lots of spun out time in a long route…and that means you get to take in the views, relax a bit more, burn fewer calories and not get as wiped as with a steady geared pace.

5am AZ time start.  Here’s the gang ready to go. 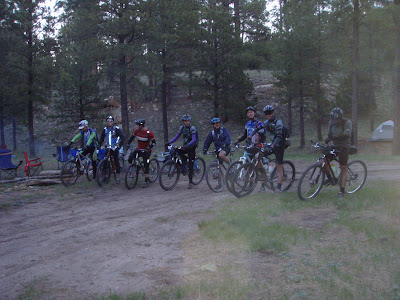 Nathan was another SSer present.  He totally ripped the Sedona Big Friggen Loop, so his presence meant there was a SS race to be had.  Dave, Chad, Andy, Brian, Calvin and Rob rounded out the field.  How often to you know the entire field by name?

I rode with Brian and Calvin for the better part of the first 2 hours.  I was most surprised to be able to keep contact on descents and fast sections – after an initial short climb, the route descends for oh, at least 10 miles.  My cleats loosened up so I had to stop to tighten them up…but other than that we stayed together.

Mile 30 or so there’s a long, gradual climb/false flat that was perfect for my gearing and I started to motor on.  The threat of 2 weeks in CA (business trip) was a real possibility, so I decided I was gonna give this thing some punch so I wouldn’t even want to ride for at least the first week ;)

Rainbow Rim trail is such a treat.  Sweet, buff singletrack on the rim of the GC, doesn’t get much better than that.

This pic is from Timp point about 1/4 mile from the trail.  Click for big to see Thunder River. 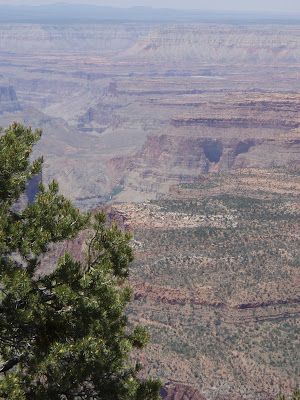 From RR is the dreaded climb to ~9200′ on exposed, dusty roads.  But for whatever reason, it went by in a blur this year.  Cool breezes and tailwinds…before I knew it there was Deer Lake….

Yes, Deer Lake.  There is a store about 3/4 mile off-route, but I forgot cash.  Dipstick.  But the emergency kit always contains chem tabs and I didn’t need more calories.  So, in Carol Ann’s honor this year I drank Deer Lake water.  It’s a stagnant pond full of swimming creepy things, moss, and ringed with hoofprints.  Ya gotta do what ya gotta do.  Shoes off, I waded out a ways to get the water away from the shore.  It was cool and felt great!  What was even better, the water had a not so displeasing “extra” taste factor.  Nutrient dense!

AZT was next.  Quite possibly my favorite part of the course, the flowing woodsy singletrack on the East Rim. This can’t be AZ! 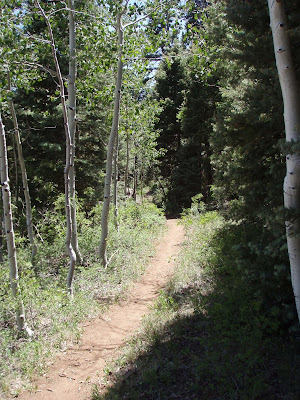 The drop to the infamous East Side Game Road was extra rubbly this year, and the game road was tough for the first few miles then became a very enjoyable cruise through dense wildflowers in a burn area.  White, yellow, orange, blue, red – all represented.  I was racing my ass off through here.  The next climb was going to be mostly hiking so I’d use that to recover.  Turns out some of the climb was rideable on the SS and it went by quicker than I expected.  Cool!

A conundrum, no?  I NEVER expected to go this fast on a SS on this route.  How is this possible…

Sunday Lynda got to taste the singletrack sections of KMC while I went exploring with the kids.  Wes just couldn’t believe that a white patch a mile off-road was snow…had to be rocks.  It’s 100+ in StG, there can’t be any snow in the whole wide world, right? 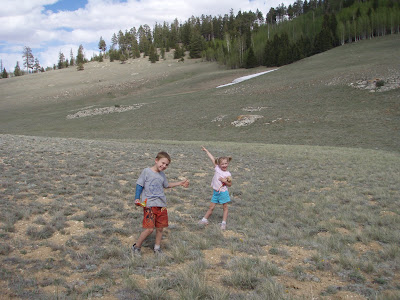 So let’s go find out! 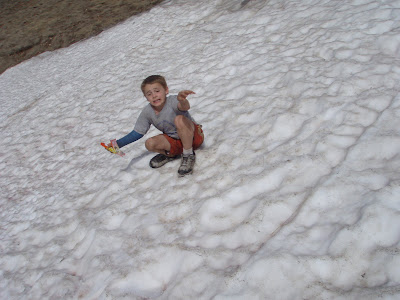 Yep, it was snow afterall.  Power slides with candy in hand.  Broken arm be damned, power slides were ON. 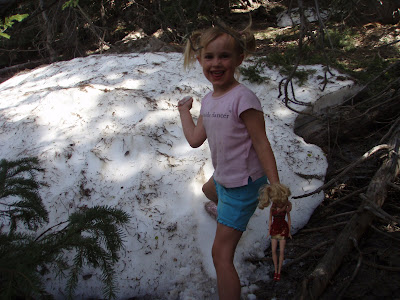 Don’t be fooled by the barbie, that hand with the snowball means business!

All in all, a weekend the likes I’ve never experienced.  Makes a guy want to freeze time and space.

4 replies on “Blissed out on the Kaibab”