Kenny Jones and I have been chasing each other around for years, but usually just a bit too far apart to converse.  I’ve long admired his grit, quiet poise, and downright bike killing abilities.  Call it a man crush if you must.  Can you blame me? 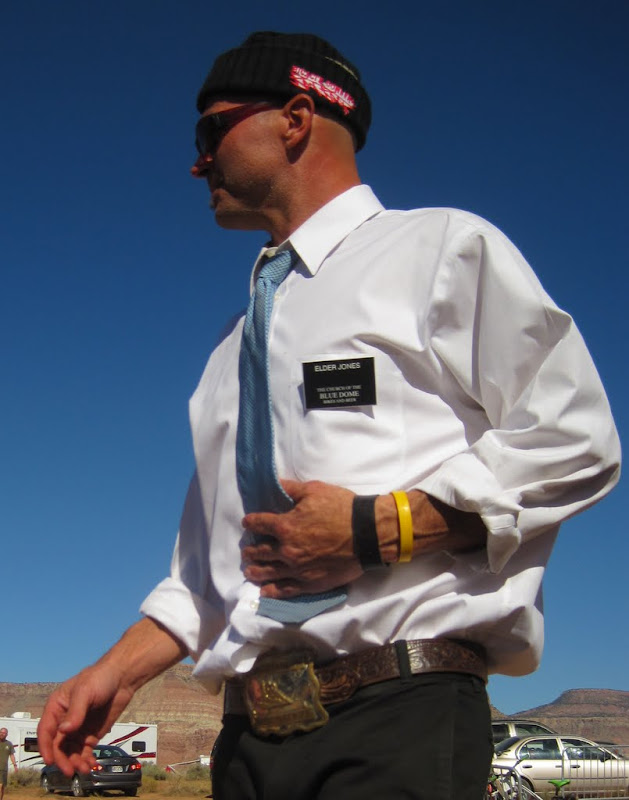 So after the Park City shindig we cooked up a plan to race the 25 Hours of Frog Hollow on a 4 person SS with Heather and Lynda.

And then Heather stepped it up a notch.

“Let’s go as missionaries of the Blue Dome!” 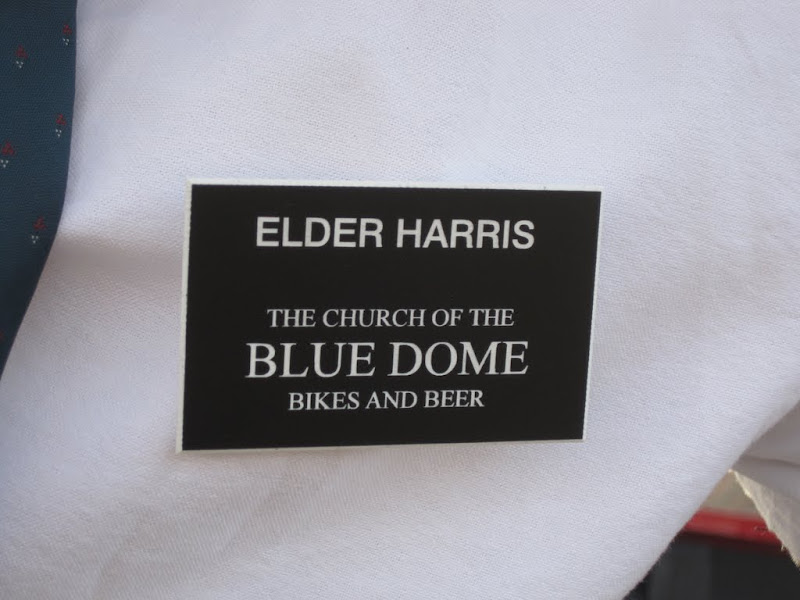 It all spun wildly out of control from there.  Name tags were made. 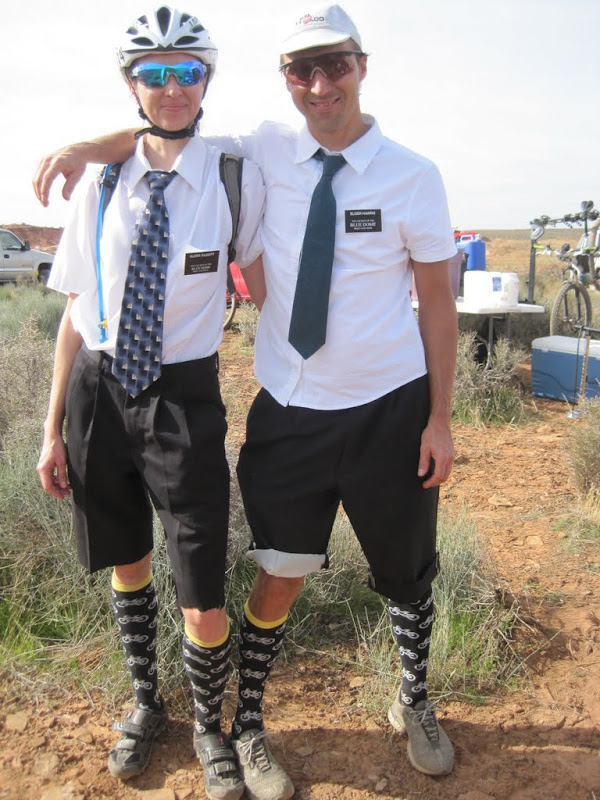 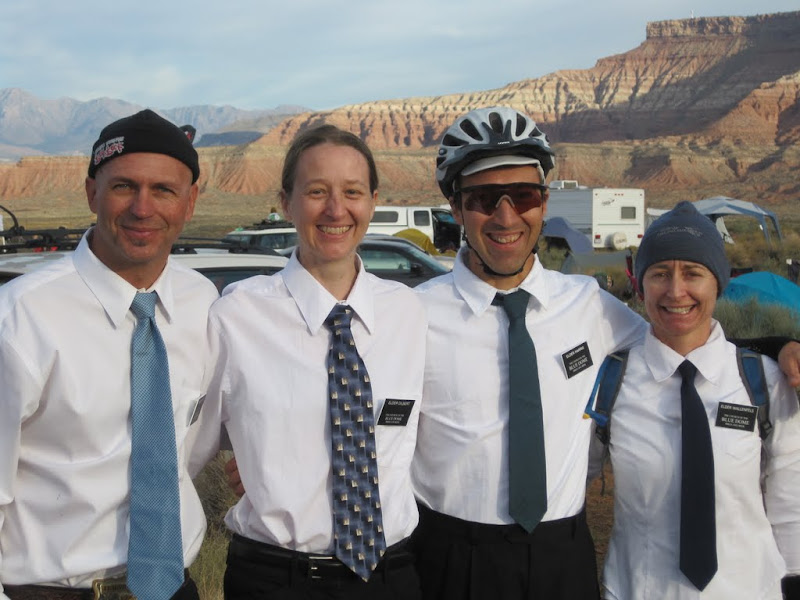 As it turned out, everyone received the power of the Blue Dome with open arms and spinning legs.  It was such an easy sell at this crowd.  I think it was about a 50/50 split between folks that thought we were actual missionaries, and folks that got our little pun – but regardless, all seemed to love it.

The night is long in November – be prepared. 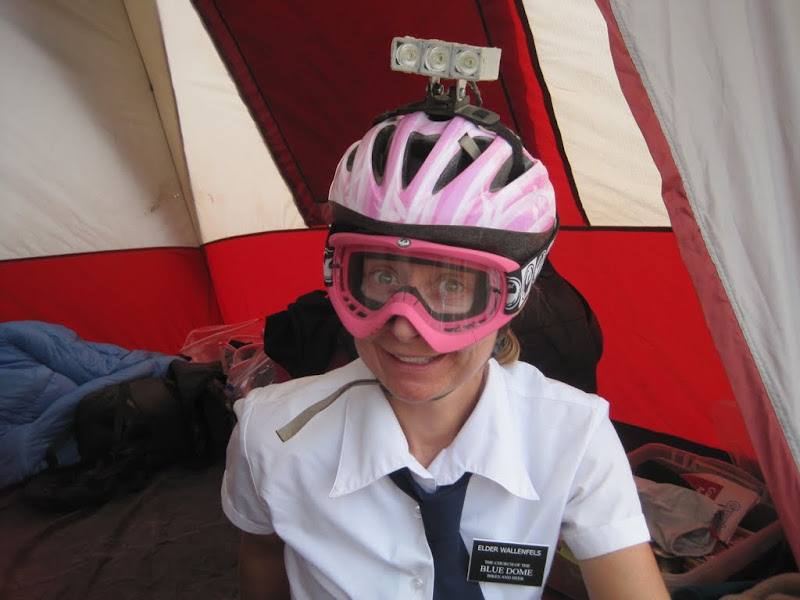 The days were warm which also took special preparation. 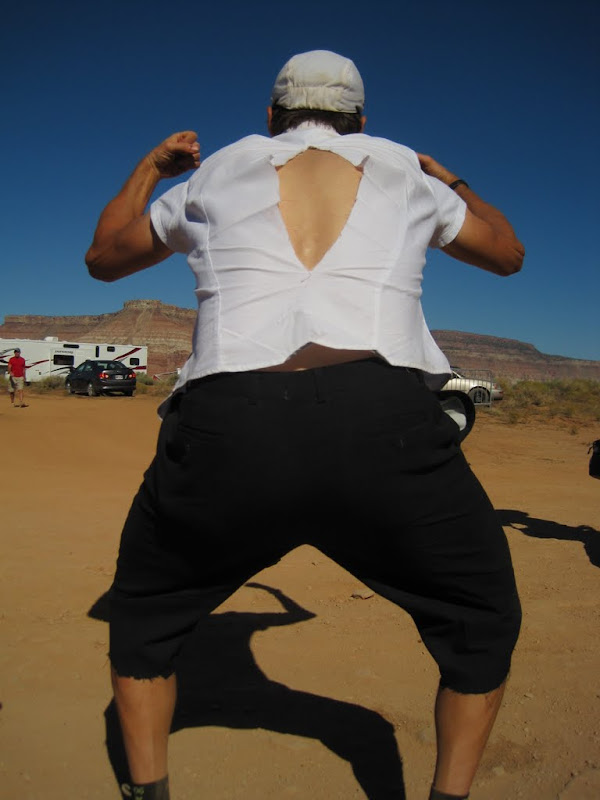 Appropriately, Zion was our constant backdrop. 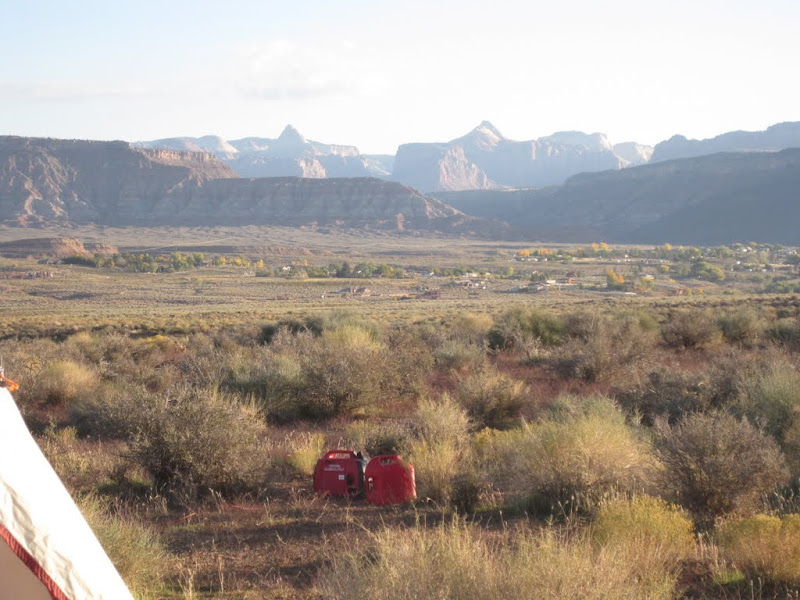 The race was fantastic. The course was perfect: mixed dirt road/singletrack/wash climbs, down the rippin’ Jem trail, then a few minutes of techy ledges on Hurricane Rim just to keep you honest. There was a new snack surprise every time I got off the bike in the timing tent. If you missed it this year don’t miss it next year! Super fun, good vibe. 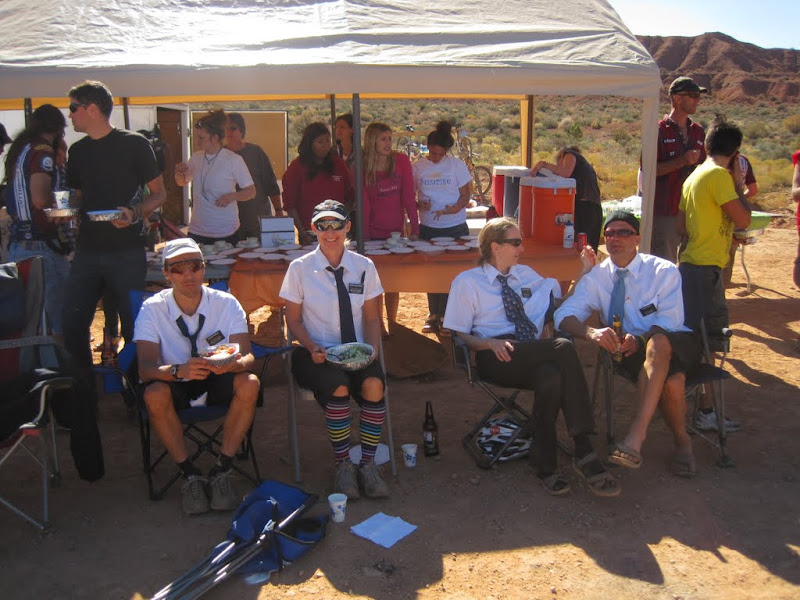 Oh, and we did make great bike race.

Kenny drilled it on his second lap trying to shake a persistent guy from the Idaho team and in the process nailed the fastest SS lap of all time on the course. Lynda drilled her first lap and got both the fastest female SS lap and fastest female overall lap (and only 2 min off Kenny’s ripping lap to boot!). 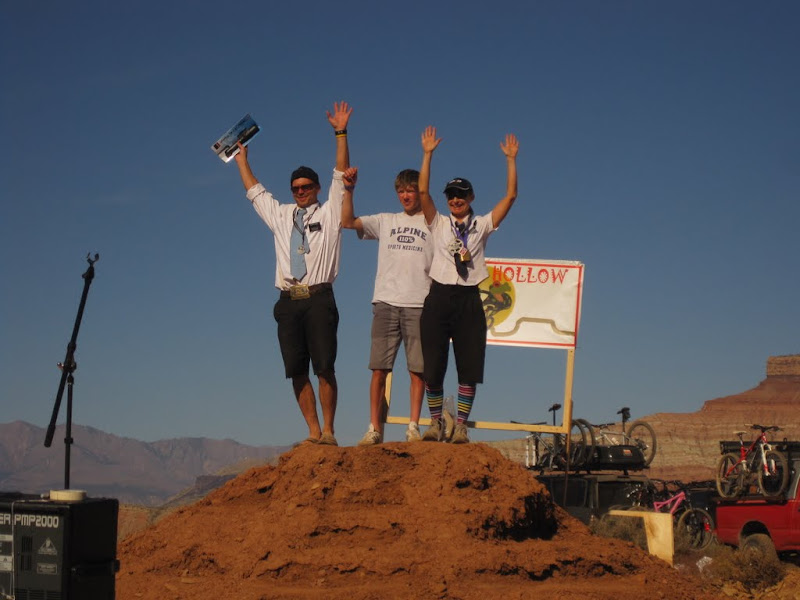 Heather killed it on every lap. I went out after her…she told me she would be doing 1:15 laps and then turned a 1:02…guess who wasn’t there in time? Doh! Didn’t make that mistake again. 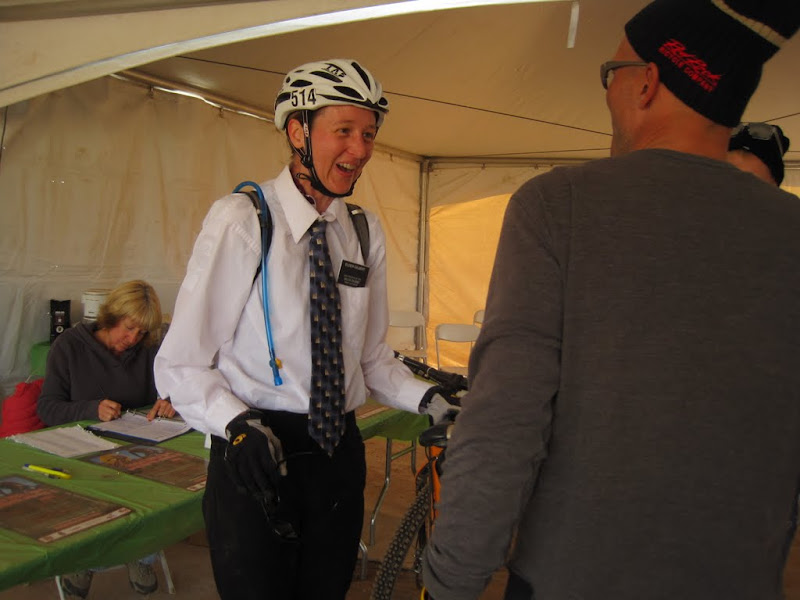 My last lap was nearly my fastest. I was locked an a duel with a geared rider and we were both loving it. It’s been a loooooong time since I’ve had that much fun on a bike.

Lynda rode a lap inches off Greg Martin’s wheel. She came in giggling about it, said it was sooo much easier cause it was a windy lap and Greg pushed it all out of the way for her (and also had some very kind things to say about his bike handling). Then Kenny came in off his lap was pissed that some dude wouldn’t get off his wheel (it was the same team). LW and I busted into hysterics immediately ;)

In the end the Idaho boys opted to drink beer instead of get wrapped up in a drag race. They appropriately received beer mugs for their prize. Jon from Sabrosa captain’d a strong team for 2nd. 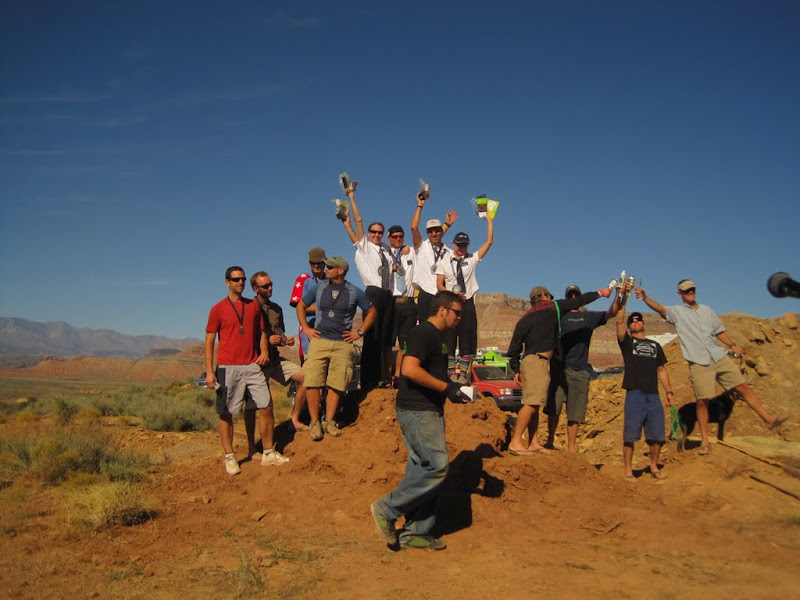 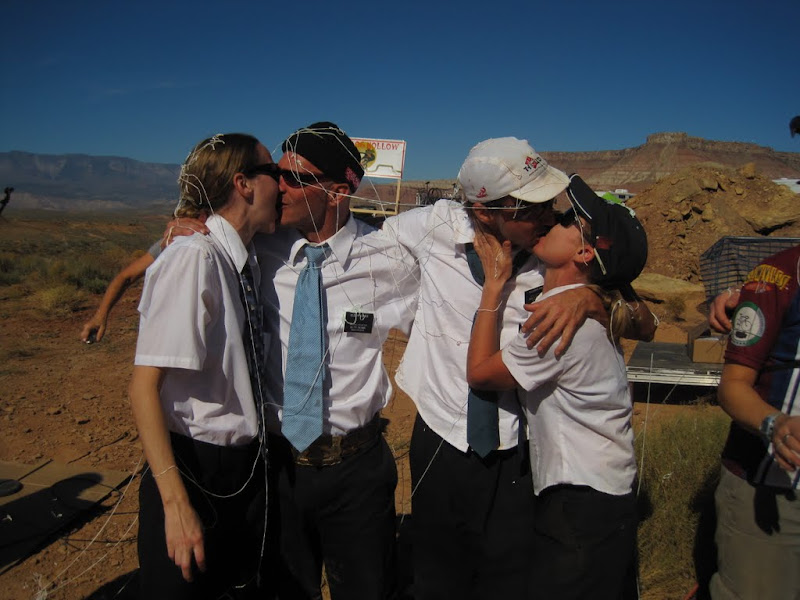