KMC is a course of contrasts.  Lots of singletrack.  Wide open desert country, Vermillion cliff backdrops.  Miles and miles of alpine deep forests.  A recovering burn area.  Grand Canyon views.  And, this year:  an alternate option to go 200 miles instead of the tried and true 130 option.

Which do you think we chose?  Right…it’s a no brainer ;)

New for this event was matching bikes for 2-Epic.  Since I got the Milk Money in May I’ve had this intense bike emphatuation like I haven’t seen in years.  It was so infectuous LW followed suit and picked up the *only* small Milk Money in existence (and to be perfectly clear:  it should be obvious now that we are not affiliated with Siren/WBR.  That is a story for another time…this story is much better). 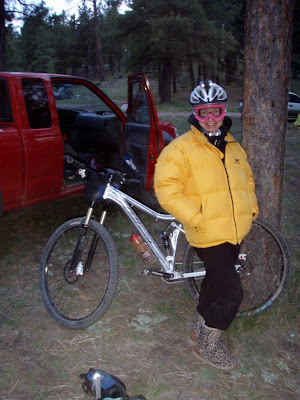 First of all we needed a revised water plan.  At first we weren’t aware of any water sources for the first ~10 hours of the route.  A bit of car scouting revealed some good news, no need for 350 oz loads at the start. 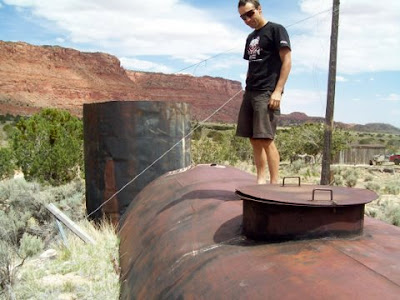 Whew, what a relief.  We also took a look at One Mile spring which I was quite keen on but LW was not so into the thumb sized tadpoles.  They were almost frogs and huge!

The car scout gave us some time for sightseeing.  There is a Condor release program in the vermillion cliffs above House Rock road.  LW’s wingspan is not quite as big as a Golden Eagle and she could be carried away for dinner by a Condor! 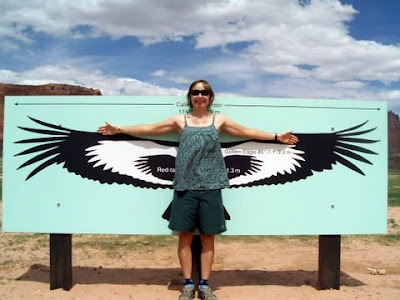 Hitting camp was fun, always a highlight of this event.   DaveC, our host, was sporting a new puffy.  Dang I gotta get one of those things!  It was chilly in camp – a first at this event.  Ma nature didn’t get the memo on global warming in the west this year. 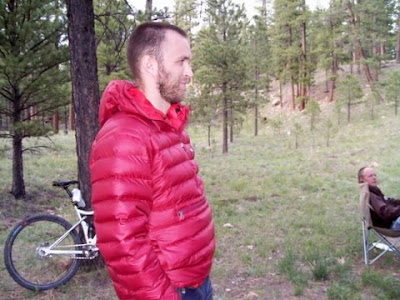 Chilly or not, MC’s legendary ice cream was not to be missed. 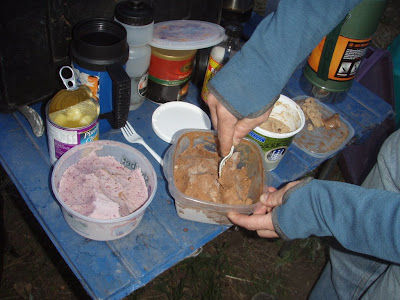 We did what we could but he was clearly expecting more folks!  Packing dry ice to the Kaibab, that’s a fine trick MC.  Thanks for the treats.

Under any other circumstance I’d be hitting the sack early given the 3 AM anticipated start time.  But it’s so rare to have time with fellow ultra MTB nuts, there’s plenty of time for sleep later, right?  And…as the eve progressed it started to get funny, mostly for DaveC.  He had planned on the 200, but then LW and I filled him in on what we thought of the route – hard.  We thought we might get it done in 24 hours (ha!), and then Chad, who had left earlier that day, came into camp after deciding not to ride alone for another 130 miles…by the time I turned in at 11pm or so Dave had decided he was just gonna go ride some AZT with whoever was up for it in the AM.  Dave Kirk was still on the course, planning to do a 2 day ride I think.

So, KMC wasn’t a race this year.  Funny thing is, we never approached it as one.  We were looking for a 2-epic adventure, a team time-trial of sorts, one with lots of viewstops, singletrack, and mutual crack.  KMC and our mojo delivered in spades…

Since it wasn’t a race and the weather was so cool, there was no need for that 3 AM start.  We chose to start whenever we got moving.  4am?  I guess the GPS file will tell all but it was still full dark for the first hour or so.  Cruising mostly downhill on the AZT for miles was a gentle warmup.  LW was flying on her new bike!  I could tell right of the bat this new ride was going to work for her.

The first 27 miles of the route is all AZT singletrack heading N to the UT border.  On the north end the trail drops down some steep switchbacks with a panoramic eyefull of red desert cliffs.  Not a bad entrance to the day!

From there it’s a 19 mile slog on the House Rock road, heading N to 89a.  This is probably the hardest part of the route on a SS – washboard hell, it’s not so ass friendly.  But putting the rp23 on full open eases the sting of the washboard…suspension oh how I have missed thee!

Soon we arrived at our water source.  How much to carry to the next source?  The route just went up and up for quite some time and we weren’t sure how warm it would get.  We left with a pretty big load.  Better safe than sorry out here.

The next 5  hours or so was a steady batch of in your face stingers in the way of short to long climbs.  Burma road (east side game road) N of the 224 intersection was new to us both had full of hard terrain!  But the burn, oh my.  The flowers were off the charts. 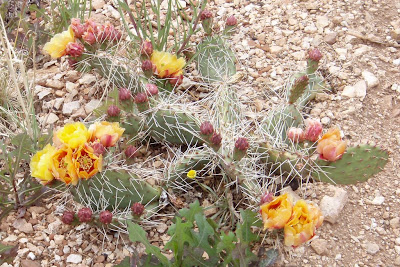 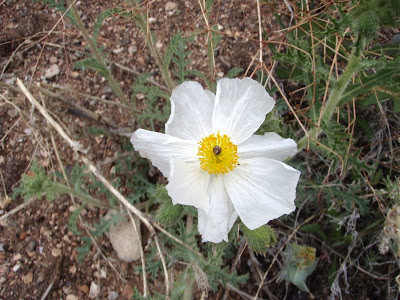 Up on the AZT at about 9k’ now, we ran into the boyz.  MC, twinkle in his eye, silently unzips his Mike & Ike’s pocket in his frame bag and gives me a taunting smile.  I nearly dove head first into the colorful sugar hole. 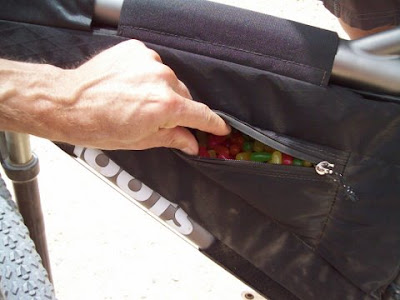 If you haven’t ridden the AZT heading S into the park – put it on your list of things to do.  The trail is outstanding!  Some wicked fun, fast descending in deep woods and loamy soil.  LW knew all the twists and turns in this section which helped a lot…it felt like we were flying.

Have I mentioned how great a riding partner LW is?  Back on House Rock road we both put the MP3s on.  They certainly lower PE and smooth the washboard some but it also makes it hard to communicate verbally.  With LW it just doesn’t matter.  We read each other well without words…

As it turned out this was my view for most of the ride.  No complaints here ;) 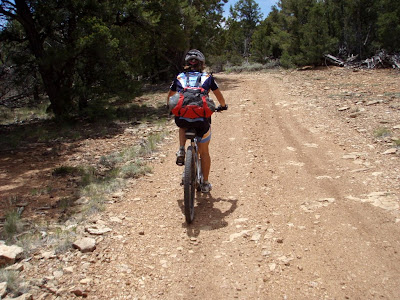 Point Sublime road was also stinger filled.  Long sandy sections at nearly 9k’?  Then the climbs come at ya one after another.  It broke me down a bit so when LW zipped on over to this spot my head was spinning. 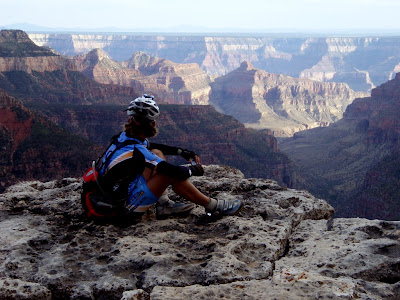 I was seriously getting hit by vertigo on that rock outcropping!  Best GC view I’ve seen.

Onward.  Damn this route is long!  Are we there yet? I was starting to lose track of time…maybe 2 hours later we hit Quaking Aspen spring and had a nice feed, coffee break, and our final water fill up.  Getting close, sorta…

There were an increasing number of things to manage.  The sun went down and with it the temps.  We were getting tired too.  That makes it easier to stop…

Rainbow rim in the dark!  “LW I hope you are having fun cause this is a blast!”  “Um, yea sure this is great” or something like that was the reply.  Truth is we were both knackered and struggling on the trail, we couldn’t really fuel well and I knew that at this pace we were not going to make the finish before sunrise.  On top of that, I was becoming increasingly aware of my diminishing food reserves.  I planned for nearly 400 cal/hour and was running out already!  I was really just trying to toss out some positive vibes to the team.  I think it worked a little?

LW has ridden Rainbow Rim many times and knows it well.  One of the last climbs she completely railed on.  OMG I don’t know where that came from but it was more than I had at that point.

By the end of the trail (with ~45 miles left to go) we were done.  As in stick a fork in ya done.  Sleep monsters were everywhere.  We made the call to stop even though we didn’t pack overnight gear.  2 emergency blankets was the extent of our contingency plan.  And, ya know?  It really wasn’t that bad.  Years ago I got stuck unexpectedly on a mountain top with a climbing buddy – it snowed and my buddy looked at me and said “Dave, this is no time to be shy” and with that we were forced to spoon for an uncomfortable and smelly night.  It wasn’t that fun.  Spooning with LW for a night is infinately better!

We had a great spot. Thick pine mat and a protective log. 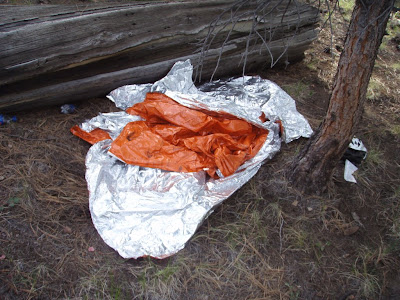 Yes, we are solar powered. 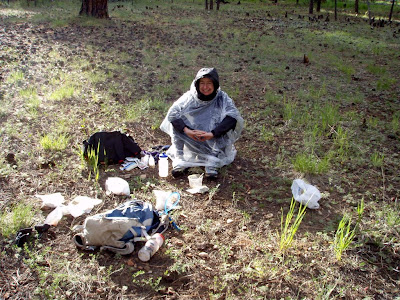 Whether it was the 8 java juices in the previous 5 hours or the sounds of that big bruin in the woods I’m not sure but there wasn’t much sleep to be had for me until there was a touch of light in the sky.  LW was snooring within seconds of getting  horizontal!!!  Role reversal…

We still got up to the reality of low water reserves and my nearly exhausted food supply.  Turns out LW packed lots more than she was eating, whew!  What a great teammate.  Her food tasted better too.

I had the power meter on board again for this trip – in fact it’s the only 29er rear wheel I have that I trust right now so it’s mandatory.  The post race analysis says that by the time we stopped the first day we had done 30k’ vert and over 8k kJ.  That’s a big day – as big (maybe bigger?) as the first day I did on GL 2 weeks back.  Joel hasn’t been calling LW mighty mouse for nothing.

The tail end of the route is probably the easiest section and we just cruised it on in.  Well except that one mile section of 12% grade – that was hard – but after that we were back on the plateau and just about done.  That’s when I exclaimed “It’s looking more and more likely we’re gonna get this thing done!”

And sure enough we did.  Still no female finishers on the 130 route but there is one now on the 200.

It was an adventure like we didn’t expect – the best kind of adventure. 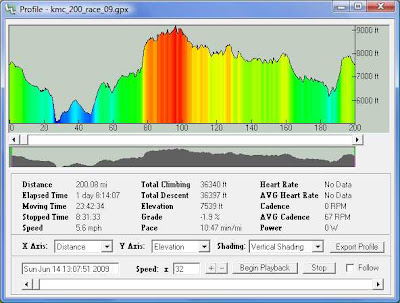