Last weekend – when many riders had set their sights on a Kokopelli trail ride – we stayed local for some important events that had been on the calendar all year.  I never imagined I’d be excited for such things…but what can I say.  Life has expanded lately and I’m finding room for all of it.

May 25 was the date we had set aside for our spring KT run.  When we first planned it, it was to be a SS mission for speed.  Then events seemed to get the better of us.  LW had to back off the training for awhile, then I got a last second request to be in LA for business all last week.  A week in gridlock at sea level is rather lousy prep for KT!  Honestly, we had scrapped the KT idea a month ago.  Well, verbally between us, anyway.  I had my secret hopes to keep the ride alive…and had actually tailored my training for the push.

I got back from CA Fri night.  Sat morning we looked at the forecast for Moab/Fruita and it looked perfect.  What do ya know, LW was all fired up to do it, too.  Our KT rose from the ashes of burnout and city dwelling…now the question was how to put the logistics together  and get on the road ASAP to get’r done?  A $250 shuttle, that’s how…Sun 12:30 AM we arrived in Moab with enough time for a 2 hour nap.  LW blasted off at 3:10 AM, I left at 4:17 AM.

Initially it was all familiar.  Heading up Sand Flats in the dark, how many times have I done that now?  What was completely different though this time was the tension in the legs caused by 34.18 gearing and 225 oz fluids on board.   And, Lynda was riding ahead of me.  Just past the turn off of Sand Flats road she had drawn a big ol heart in the sand in a spot I couldn’t miss…who knew such experiences awaited on the KT?

LW had similar gearing – 34.19 – and we both thought the La Sals were waaaay harder than with gears.  Yes, we are human and both of us ended up walking on pavement – more than once too.  Between the SS challenge and the extra weight I was hauling for this one (my water filter is AWOL!  Anyone seen it?) I hit the top of the La Sals 15 min later than normal, 3 hours.  I wasn’t too concerned though as I figured since I wasn’t going to filter I was actually already ahead of schedule.  What an optimist ;)

The N Beaver descent was fun as always and before I knew it there was RGH.  A short climb later and it was time for probably the toughest part of the ride, the rubbly Cottonwood canyon climb.  This thing kicked my ass.  I whimpered.  I walked.  Whimpered some more.  Stopped and stretched my back some.  I cursed no less than 6 false summits.  It was less than 40 minutes but felt like a lifetime.  In ’06 Jon Brown set the SS KT record and won the OA as well.  He said he walked most of this section, now I understood why.  I descended the Shandies somewhat shellshocked by the difficulty of the La Sals with a sudden respect for anyone that has SSed this thing.  Some courses seem easier to me on SS, but not this one.  Not by a longshot.

At the bottom of Cottonwood canyon there was Lynda filtering water.  Record attempt be damned, I couldn’t just ride on by an encounter with my dream girl now could I?  Of course not :)

6:16 to Dewey.  Or, should I say what was Dewey.  45 min off the pace of my last two rides here.  Hmmmm…..could I cover the next ~76 miles in 7 hours?  I wasn’t so sure.  I thought about sticking my feet in the swollen Colorado river until LW got here then finishing with her.  But I wasn’t yet ready to throw in the towel.  I ramped it up for Yellow Jacket, felt great and did it in 57 minutes.  How about that.  Game ON.  It was going to be close, but I now recognized the sensations….a challenging goal, a ticking watch, 75 miles of trail and a deadline.  I suddenly felt great.  Towards the end of Yellow Jacket an ATVer asked me if I had a minute:  “sorry, I don’t” and kept on motoring.  I was on a mission.  Hey, if LW only gets 4 minutes this guy gets nothing!

The KT is a biatch to gear for.  In the La Sals you want small gearing for the long, sustained steep climbs.  In the rolling to flat east section a big gear would be great.  What is fastest?  The challenge beyond McGraw bottom was maintaining concentration to rev it up to 19 mph, coast to 14-15, repeat…for miles on end.  It wasn’t that hard to do being a high cadence guy, but it was easy to forget to do it.  Kinda strange, eh?

I wondered where LW was and how she was fairing… 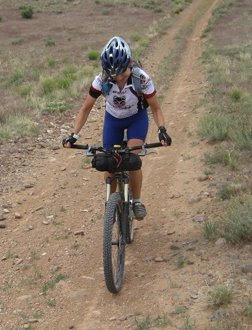 There was a surprise appearance of Chris and Marni at McGraw bottom.  What a nutcase, he just did the KT SS a week prior and was back out there touring it with friends.  Manic!  I slowed as I came up to them but they told me not to lose my flow so no unclipping occured.  Being cheered on during a self-support event was confusing and welcome all at once. 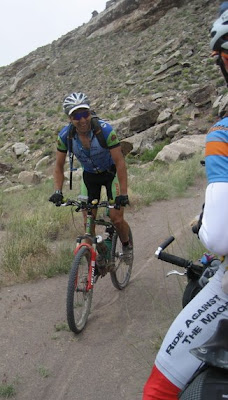 Water.  I had to make a call:  head to Westwater for a refill as I was getting quite low, or continue on at risk of dehydration but without the 15-20 min time penalty.  I knew there wasn’t much time to spare, if any…I’d been rationing water for quite awhile which was affecting ability to fuel.  It was all getting rather thin, but I had a lot of cytomax gels that didn’t need much water.  Then I remembered the chem tabs in my first aid kit.  No brainer:  no WW detour, treat some Salt Creek brine if I really have to.

Last year I did the desert section of the KT many, many times.  It has great flow and I was really looking forward to it.  The part between Westwater and Rabbit Valley in particular is full of fun terrain, great for the SS, lots of rolling short climbs and fast descents.  It did not dissappoint!  OK it was Memorial weekend and the ATVer factor was pretty high.  LW was even harrassed by one of them.  Evidently it made him feel good to harrass a 105 lb gal on a SS.

The difficulty of doing a blog for the two of us when we didn’t ride together should be obvious…but here’s one piece of her ride I do know about.  There’s this short hike a bike and there were some ATVers there, watching her  hike this thing that the ATVs have beat into dusty oblivion.  One guy has the gall to tell her she needed a motor, to which she replied “Honey, I’ve got only one gear and I started at Moab 3am this morning!”

Spunky!  But that’s nothing coming from this gal.  The other day she noticed a bunch of cigarette butts in her yard, obviously they came from the neighbors flicking them over.  She picked them up, took a big handful over to the neighbors door, knocked, and when he answered said “here these are yours” after which he put his hand out and she filled it up…and he was clammoring on the ground picking up the ones that fell through his fingers, stammering all the while…

They don’t call her Mighty Mouse for nothing!

Right, so this bike ride….forward progress continued…the Salt creek drop in was surprisingly rideable.  I arrived dry.  Gawd I’ve never done a KT in the Moab to Fruita direction when I didn’t drink this nasty thing, it always makes me thirstier.  I had something like 1:35 to match the current record leaving from Salt Creek.  I was pretty sure nothing short of a catastrophe would get in my way.  I could taste success.  Then, shortly after the first hike a bike, wow my legs were just noodles.  It was an unfamiliar sensation for sure.  I could barely pedal and felt sort of strange.  Maybe it was the chem tabs from Salt creek?  LW tells me it’s something called a bonk.  Well anyway, gels, figs and salt creek brine chased it away…and then the snake episodes.  Snakes!  Not once, but twice I had to climb around snakes that wouldn’t leave the trail, and I wouldn’t roll over them.  It was steep rocky and not much fun…more time burned.  Now it was getting tight.

Troy built just is never that much fun after 138 miles.  That climb was a hike.  But from there it was fun ripping tech singletrack to the finish.  Mary’s was never ending, mostly cause I was watching my watch – 14 minutes…12…10…9…oh thank gawd there’s that last climb!

LW rolled in shortly afterwards.  That girl is so gritty…doing KT in a day requires some prior planning.  We both paid the price for the last minute decision to do it.  My price was a lack of a water filter, hers was forgetting to swap out her saddles.  I’m not going into details, other than to say her price was much higher than mine ;)  OUCH!

Oh yea, we both rode our PowerTap MTB Disc wheels laced up by MC.  They both worked too!  My stats were:

With this ride, I think I can speak for us both that this obsession has found closure.  The KT is beautiful, wonderful riding.  And so are many other places…the quest moves on to new pastures.