That fancy new PT Disc wheel is still not on a bike…I tried yesterday but the rear triangle on the bike it was to go on doesn’t have disc mounts!  Geez.  It was a bummer at first…big ride day on the plan.  What to do?  Take the SS of course ;)

32.17 has been the gear of choice for a long time now.  It just fits – and the chain hasn’t stretched in 300 miles.  The route was to be the Lime Kiln loop we did last week.  Taking the SS I was just a bit too intimidated by one section of it so modified the route slightly, but it still ended up at 129 miles and 15k+ vert.  Ah, and it was 91F in Mesquite yesterday.  Ouch!

Will I ever race a bike again?  Sure…but the idea of a SS solo TT of the KT is much more appealing right now.  Yesterday’s route was a lot like doing the KT minus that last bit of singletrack on the Fruita end.  I now know I can finish it on a SS – and that it will hurt ;)

Sorry, I wasn’t a good hippie yesterday so no pics.  The flowers seemed muted anyway…maybe it’s the ride company that makes them pop?  Curious…

– being spun out for long periods is tough on the butt, but if it’s downhill and you don’t have to pedal at all it’s a great time to toss 700  calories down the hatch.

– an aero position that serves the dual purpose of also stretching hamstrings and back is key (found it).

– Dairy Queen is the ideal pit stop in the heat.  They fill your bladder with cold water, give you ice cream, and do it all indy pit style.  In & out in under 4 minutes ;)

– High power spikes put the hurt on ya late in the ride.  Duh.  Exacerbated by the heat for sure, but still…

– Enduralytes are still magic in the heat

The PT actually croaked for about 30 minutes, but it was mostly downhill towards the end.  Here’s what it captured of the day: 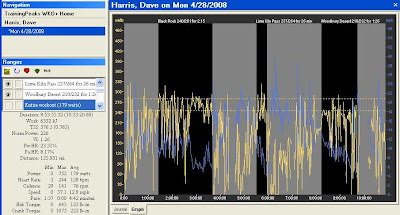