The world needs more 12 hour races.  It’s got to be my favorite distance/duration.  The great folks over in Cortez, CO are doing their part to make the world a better place by hosting the annual 12 Hours of Mesa Verde.

Last year I had a pretty good time at this event and just knew LW would love this course.  She’s a gifted bike handler and this course requires constant attention from the gun.  So, we made a 2-epic assault on the event.  Both SS, both self-supported.

Early that morning getting ready for the event I cracked open a new chamois, pulled a brand new team jersey out of the plasic, and rolled my brand new bike to the car.  I was full of anticipation and ready to race for HOURS…the race couldn’t come soon enough – well until I temporarily lost my sunglasses, that is.

The course was a bit longer this year at 16.5 miles, so I figured there would be no way to do more than 8 laps.  The course is all singletrack, and the thing I really botched last year was lap 1 placing.  I ran like a small child and lost 15 minutes to traffic.  This year I was ready for the run.  Not by doing run training, but by convincing myself I was going to run at the front.  Running is a state of mind, right?  So that’s what I did and it worked.  I was shocked when I got to my bike after the Lemans start and there was nobody else near me to get in my way…so I just pedalled off with the leaders, and immediately moderated my pace.  It was going to be a long day…I’d already made the initial move I wanted so chilled from there.

OK so by now I’m generally bored with the lap race concept, but this one is different.  The trails are so damn fun, and even better at speed – and there were a lot of really cool folks in attendance.  A sold out solo field, lots of Ssers, and big wheels were the rule, not the exception.  So I just kept roosting along enjoying the trails and the perfect conditions.

One thing jumped right out at me, especially doing some riding with a rigid rider.  The Milk Money is da bomb in techy stuff.  Having rear suspension on a SS might sound blasphemous, but whoa.  You just gotta try it…every time in techy bits I was gaining time over rigid riders, period.  What’s more, it saved my butt considerably over the HT ride last year.  Last year Tuffy Rim brought about dread, this year I looked forward to it!

The race felt a lot like last year…one lap I didn’t feel that great and then got better every lap after that.  Fueling was perfect – although due to the heat I was going through 100 oz fluids/lap on course + about 20 in the pit.  That’s roughly 85 oz/hour which I thought was not humanly possible, but anyway…I guess I was riding hard ;)

Towards the end of lap 7 I was looking at the time and was shocked to see that it might be possible to do 9 laps if I got jiggy with it.  Well, I didn’t really want to get jiggy with it…so I slowed down a little, and then took a long pit.  Dave Byers (who was helping refill camelbacks, thanks man!) wanted to know the merits of FS SS riding.  Finally I said “well I’m still racing so we can chat more  later!” and off I went for lap 8.  There was only about 1:23 left so no way to come in before 6:30 and have that option for a 9th lap.

So the last lap was just going to be an easy cruise – and then I spotted Jens in front of me about 30 seconds.  Jens was leading the Solo geared cat and has won the 2 previous years.  Suddenly I switched from riding hard to racing mode.  Could a SSer really take the solo overall?  There was some extra gas in the tank I wasn’t aware of ;)  He was riding fast and looked super smooth, and dropped me mid-course where it was more flat than uphill.  He came back into view a bit before Tuffy Rim.  I don’t think he liked having me on his wheel as he pulled over and from there I rode every climb like it was the last and blasted Tuffy rim hard using all that suspension.  Whipping through the trees the last few miles of the course there was some serious mental stuff flowing.  I swear I could hear brakes behind me squeeling, only to look back and see nobody.  I was convinced I was moving fast enough that I was outrunning the sound of my own brakes…the pinyon canopy overhead was blurry making it feel more like playstation than a bike ride.  It was heady for sure.  It all came clear shortly after the finish as I learned I was losing sight in my left eye (again!) and my earbuds were a bit too loud :)

I came into the finish at 6:27 – 3 min before the deadline!  Dang…decision time.  I sat in a chair and no solos came in the next 3 minutes, the race was done and I had no desire for another.  Done!

Utah was well represented.  KC and Chris Holley ripped it.

Shannon and Jen were 2nd in duo mixed.  I got to ride with Jen on each of her laps :)

LW and I never crossed paths during the race – which is a good thing.  I was getting steady reports from pit neighbor Sharon that she was smiling every time through.  It’s a rare event that we both manage to hit that top step together.  ‘Twas a good weekend!

Racing on Mother’s Day weekend, moms got a special purple ribbon.  There were a lot of moms on course! 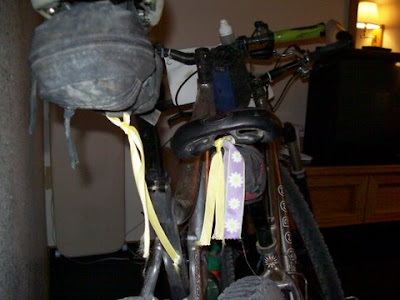 This wouldn’t be complete without some geekout.  Of course I raced with a power meter on board.  It’s fascinating how different SS racing is from gears.  Here’s a power distribution from a 12 hour event in Park City 4 years ago.
Compare that to the distribution from the Mesa Verde event:
Um, yea.  1.5 hours in L6!  That explains why I feel the way I do right now.