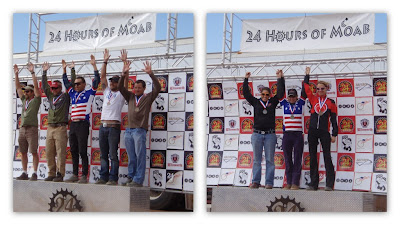 This one has been a long time in the making.  As recent as 3 years ago I thought riding a SS was a freaky fringe thing – as all non single speeders do.  After bombing out of Moab in ’07, racing with pre-existing injuries, I was certain the Moab chapter was done.

And then about 2 years ago I put a SS conversion kit on an old HT frame…and then USAC announced Moab as the venue of 24 nats for ’09 – coinciding with the SS obsession – and like a moth to a flame, it was on.

We had plenty of 2-epic planning sessions.  What gear to run, what strategy to use, what fuel, tires, pit setup…and of course what training to do.  I rode a Milk Money in ’07 – in fact the first time I ever threw a leg over a SS bike – for a few minutes on Gooseberry, and was amazed at how nimble and *plush* and firm it was all at once.  It was hard to shake that notion, of how well suited it was for the Moab course, and with Nats in mind I pulled the trigger on it early this year.  Lynda got right in line shortly thereafter ;)

Mike Curiak has helped us with our 29er FS SS addiction every step of the way.  Bikes, wheels, tires – he’s one dude with more miles than I, lives next door to Moab, makes the finest hoops around – all around great crack daddy and nice guy.  Unless you are racing him…

I got a bit carried away with the bikepacking thing this summer.  Multiple sub-24s, Grand Loop, KMC, an 8 day bikepack trip with LW, CTR – it was an absolute blast but by the end of it all I was friggin smoked and not particularly fast.  It was a tough pill to swallow but after CTR all long rides got the AX.

Quality work was king and longer rides were 6 hours max except for one big day on the CT 3 weeks out.  As Moab loomed closer, anticipation/excitement rose along with fitness.  Layers of fatigue melted away, a new snap came into the legs, and power began to rocket upwards in a hurry.  I added some key workouts that addressed my personal weaknesses that would be a key limiter at Moab…and the last one knocked me down for a good 7-8 days.  But as recovery came, the peak was on – on big.   Certain bits of trail that used to feel challenging became easy.  I’ve been here before only to get carried away and peel that peak away before raceday.  Not this year.  LW could see it happening and told me I was gonna have the race of my life.  Curiak said his magic 8 ball is never wrong WRT Moab and it said this was my year.

Meanwhile, LW had been talking with JenyJo about being pit boss

and then Cynthia decided to come too.  Kong and Adam were in to turn wrenches, keep tabs on results, and scream like maniacs as we left the pit – it just doesn’t get any better than this.

Mojo was in place.  It’s a damn good thing because the unknowns were pretty big…this is the first year USAC has recognized a SS 24 solo championship category.  The first year to have a SS solo category at Moab.  And since you could preview the start list at grannygear.com I knew I’d have my hands full with Dejay, Greg Martin, Shaun, and other honches in the field.  Despite the stacked field, I gotta admit it was Nat Ross who haunted my dreams pre race.  In this funky dream I had Nat was at the start, riding SS, drinking a can of Red Bull then crushing the can on his forehead with a mouth full of grinning teeth.  Seems I’ve been one place behind Nat so many times it’s left a mark LOL.

There’s a lot more to the story but I’ll try not to get too verbose.  For myself, the journey is FAR more interesting than the destination, even when the destination is what we seek.  This big long preamble *is* the story in my mind.  The hardest part of 24 hour racing is done once you arrive to the start line.

And, we did arrive at the start line.  What a crazy scene as always – every year it’s some dude wearing next to nothing that takes the lead in the Lemans start run.  For the rest of us it was a dust eating contest.  LW claims the win but I was a close 2nd ;)

Heading up the road on the first lap was madness.  My 33.20 wasn’t really tall enough to be near the front so I didn’t run that hard.  This probably put me about 100 riders back, and damn that’s a rough place to be.  Everyone was pinned and racing, it was kinda funny to be spun out and coasting through the madness.  Some dude yelled “in the middle!” and stuck his elbows out between two riders that were already bar to bar and of course caused a big fat crash directly in front of me.  Tempers flared (not mine, I avoided it).  This was clearly a different sort of 24  hour race now that USAC and a jersey was involved.

Alas, it all settled down eventually, riders spreading out.  The flow was good, I felt great, and the course turned out to be fantastic fun on the SS!!!  The tech/ledgy bits were every bit as ridable as with gears and the sand traps were fine too so long as they were free of wallowers.  I rode with a couple SSers on the first lap – Brae was young and strong, easily cleaning a steep rock face I couldn’t ride in the pre-ride and never attempted in the race.  Shawn was looking strong.  Dejay was out front and looking strong but was not psyched to see me on a FS:  “awe FS?  You gotta get a 30 min penalty for that!”  I agreed immediately.

I didn’t expect to move into the lead so early – but by lap 2 I was out front and never looked back.  I honestly thought I’d be running 1:20-1:25 lap times given the gear limitation and all the spun out sections on the second half of the course.  After learning I was doing consistent 1:15’s I pulled the reigns in a bit.

I had a great time the first daylight hours chatting with friends on the course.  I rode with Sonya a bit

and yo-yo’d with Pua for 3 laps

I also ride a bit with Ernesto and Eddie Odea who I had not yet met in person.  It was pretty cool to have just about the entire national level enduro field in Moab this year :)   I never rode with any one person very long though.  SS flow is so different than geared – the first 5 miles of the course I was relatively flying, while the flat stuff later I was relatively pokey.

Meanwhile LW was putting down a solid race.  I was  hoping to catch her but damn she was flying.  I did finally get to ride with her in the night for a bit and she looked great, climbing well and railing techy stuff in the dark.

After the 2nd lap my lead continued to steadily grow.  That afforded some comfort time in the pit.  Instead of 30 second pits like ’05, I could sit down for 5 min and stuff 400 calories plus a red bull down the piehole.  Jeff Kerkove captured a video, super candid – I had no idea he was filming until the very end of the clip – that shows how awesome our pit was dialed on multiple levels.  JJ keeping me fed and primed for the next lap, Cyn and Kong figuring out where in the field I am, and my nutty crack state at 3AM.  Kong is trying to tell me I’m in 3rd in the open geared race and I simply couldn’t wrap my head around it at the time.  During the race I became entirely focused on the SS race…not sure  how to embed it here, it’s on facebook at http://www.facebook.com/video/video.php?v=1211372935270.

While in the pits about 4AM Toastman rode by.  I just got lapped by a solo rider!  Holy crap I didn’t expect that.  He was having a fantastic race – and it was no surprise.  We chatted the morning before the start and I could tell he was confident and ready for any challenges.  As was I.  We were musing that with such a talent heavy field there was going to be mass carnage as Moab likes to dish it out to solos in even the best of conditions, but also that he and I were going to have one helluva great time…in any case I left the pits a couple minutes after he went by and rode up to him at the top of the first climb.  We rode together for a good bit, chatting along the way.  I could tell he had a blistering start because he wasn’t riding fast on the climbs.  He didn’t need to apparently as he had an hour lead.  I rode ahead on the climby stuff and he mached  by in his big ring on the fast descent to the finish…

Finally the long night gave way to early light, and I decided afterall to stop for some food, coffee, and even a short nap.  My lead was approaching 3 hours and I was willing to use a bit of it to really be able to enjoy the last 2 laps.  And that’s about how it played out.  I did get a bit wheezy from 24 hours of dust towards the end but even on lap 15 I was completely enjoying the flow of it all.  I rolled  around the course easily, enjoying the play of clouds and sun in the La Sals, the desert beauty all around, the heightened awareness that comes with exhaustion, and rolling down the final descent was hit by a wave of emotions and those dang tears busted loosed under my glasses.  Why does that happen?  A couple team riders ripped past me to snap me back to the present…

Race highlights:  JJ, Cynthia, Kong and Adam keeping us comfy and dialed.  Seriously, it was uncanny how quickly JJ adapted to our flexible race plans and seemed to know what we needed and when.  Simply brilliant!  This was a complete team effort, no question. 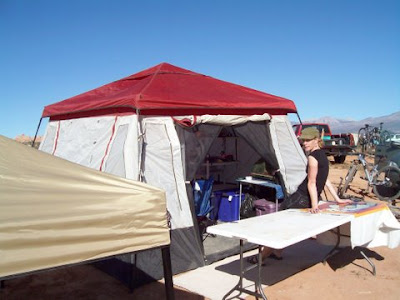 LW riding smooth, smart, tactical after having a less than ideal preparation. 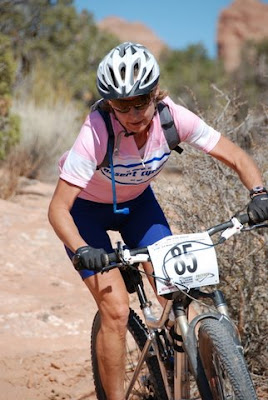 Chance meetings with the finer half of 2-epic on course and in the pit :)

And drumroll please….we’ve earned jerseys before together in races, but by far the highlight is earning the stars and bars together with my dream girl. 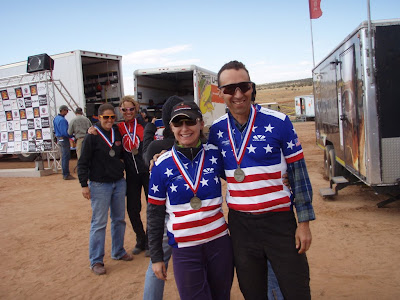 We wear these for a year.  I’m  not exactly sure what that means, but all the same – pinch me!