It has been a funny season as far as race planning goes. Most of the races I have planned to do haven’t happened for me – for a wide variety of reasons. My normal MO is to set a goal, design the killer training plan, train like a demon then go out and give it my best. This year I’ve started and stopped and modified my training plan on almost a weekly basis as the race schedule changed. It had been annoying me lots.

The most recent killer plan was set to peak on June 7th at 12 hours of Steamboat – a high altitude event. I live at 2800 feet elevation. Always my first trip up to altitude in the spring is a tough one. I get spacey, my power drops dramatically, I get tunnel vision and visual disturbances. Every year before racing at altitude I go train up high to get this day over with. Once I have been through this day then all the weirdness goes away for me and I am happy being high.

Going high this year has been close to impossible due to the massive amount of snow. I decided to try out a different approach to pre-acclimatizing for 12 hours of Steamboat. Intermittent Hypoxic Exposure (IHT). A USA Cycling coaching webinar on pre-acclimatizing to altitude I took in March stimulated a lot of thought. That and the fact I now have access to this little gem. 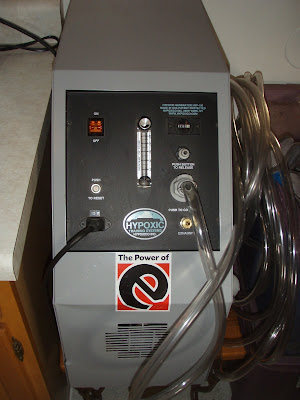 Protocol: Starting May 13th the plan was to ride the trainer twice per week for an hour at power L2 and up the altitude to the level I could tolerate. I started at 10k. Just before the place visual disturbances and tunnel vision set in. It was funny to be pedaling at such low wattage and be huffing and puffing like near threshold! The second ride I set the air at closer to 10.5k.

Then Steamboat was cancelled – well postponed actually to early August when I’ll be at Trans Rockies. So the whole Steamboat IHT and peak race plan was bunk :-( Grrrrr…

Dave came back from California late Friday night with a head full of Kokopelli. That course tops out at 8.6k elevation – high enough for me to get dizzy without some acclimatization. Kokopelli all of a sudden sounded like a really good way to spend the weekend.

Results: Even tho’ I had only pulled off two IHT sessions by the time we did Kokopelli I hammered over the 8k+ altitude marker without any spacey or visual effects and only a slight drop in power – how absolutely cool!! It worked for me. I rode in 15:21 good for the KT SS record = Happy (and sore) me.

Kokopelli was much, much harder SS than gears. WOW! I took 5 days off the bike completely baked after and 8 days later I’m still tired.