We won and had a supa time. Big smiles on the top of the podium :-) 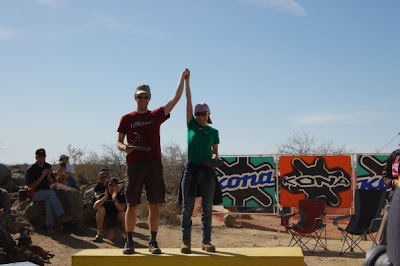 Just the “we” was not the “we” originally planned. Dave came down with a flu bug on Tuesday, got worse on Wed and on Thurs. The other half of the “we” was Tucson local Scott Morris who mobilized on last minute notice and jumped into be my team mate.

Here is Scott ready to go before the start with a number plate on his bike. Those who know Scott will see the funny in this… He is better known for self supported races that are over 300 miles and last for days – no number plates. He was game to give this lapped racing a go. Lucky me to have such awesome friends!! 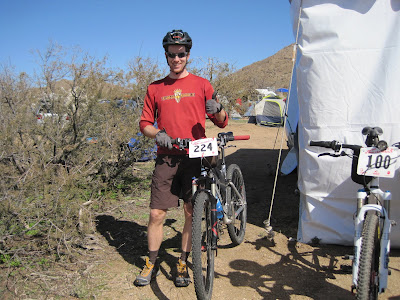 I drove the 10 hours down to the race alone feeling a little orphaned with Dave staying home. When I drove into the race site another Dave was there to welcome me. Dave Byers and I had rented a party tent together for this one. Byers was racing solo unsupported. 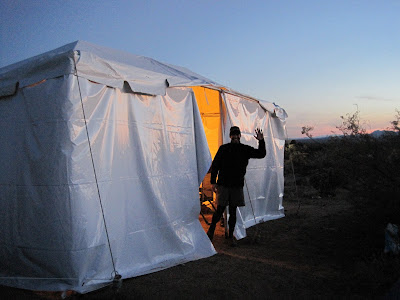 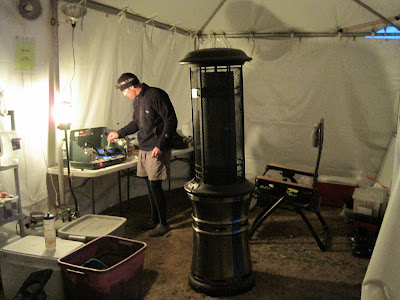 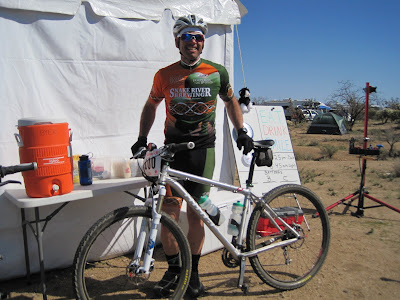 Scott having never done a 24 lapped race duo before was excited for the experience so it was only right he got to experience the run. I have ran enough times at OP…it is a bit rough for my liking. It was crazy watching it. It looked even more of a melee from the sidelines than when I have ran it. 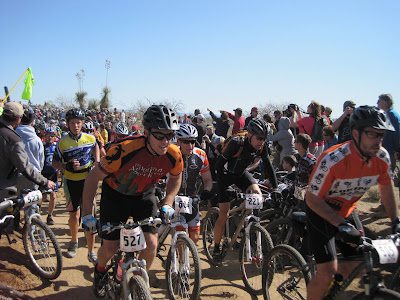 ..and so it started…Scott picked up his bike in about 50th place on the run and was off. Our game plan was to keep it steady and consistent for the 24.

I went to the timing tent with hundreds of other racers to wait for our turn. The first co-ed duo team came in at 1:05 – wow that was fast!! Jeny headed out on the course and I waited and waited for Scott. The next duo team came in at 1:06 – dam that was fast…and I waited and waited for Scott. I looked at my watch, 1:07, 1:08, dam those other teams had been out on course a long time – where was Scott??? 1:13 the third place co-ed duo team came in. My heart was 150 bpm just standing there. Did he crash or flat?? Where was he?? and then he appeared at 1:13:44. Funny, funny stuff cause we had set a target of about 1:10 – 1:15 for his first lap and he nailed it. I was just a tad amped ;-) I settled it right down on course and rode smooth and conservative and on plan.

I focused on riding smooth, efficient and clean. On our 4th lap (my second lap) I spied a pink helmet I was catching and surmised it was Tracy Thelen from the second place duo team. Smooth and efficient went out the window for a bit as I got all excited. I made a really bad pass on her and this guy right behind her and made them put on their brakes, I was embarrassed…that was the worst pass I made in the entire race…so I said sorry and sprinted off to get out of sight. If I was Tracy I would have rolled my eyes at the display of inefficiency so early in the race. I felt like a dufus. But once out of sight I settled it back down and got back in my flow.

Scott went back out and rode our fastest lap of the race, a 1:09, our 5th/his 3rd lap. The cat is out of the bag now!! Scott Morris is fast!! We started to inch a few minutes closer to 1st place team each lap. Scott came in from our 7th lap only 4 min behind and then I was out on course chasing Jeny. I made a clean pass on her at the halfway mark but still had too much of a racer face on to slow down and chat to her – even tho she is one of my best friends!!!! I am so silly with my race face on sometimes and I know it!!

Scott and I rode what I consider a text book race. Mistakes we made were minor and fixed quickly. We had no crashes, cholla incidents or mechanicals.

By the morning we realized if we hammered out laps we might make 20 laps. That was huge!! I pulled out a 1:12 lap just after dawn matching my first lap pace!! It was fun to be hammering and not having to keep it smooth and efficient anymore. I was aiming for fast now not efficient, flying up the bitches in my big chain ring – fun, fun.  I hopped into the draft of a passing SS rider who was rocking along and drafted him for a long time. He was awesome. Thanks Charlie :-)

In the timing tent waiting again for Scott….they started the count down to noon at 11:50…10 minutes left…then 5 mins left…no Scott…. “another rider coming” shouts out the announcer, “who wants this one”. Everyone  waiting stands on their toes and leans forward to see who is coming in.  “Number 224”. I whoop and run out there to meet Scott waving my arms and yelling!! Yeah!! I was psyched heading out on course at 11:55:25.

The 20th lap was a ton of fun. There was no point to hammer so happy cruise pace was switched on. The course was empty, no constant passing which was refreshing. It most definitely felt like a victory lap. Scott was waiting at the finish with smiles, high fives and hugs – super awesome race…

Meanwhile….Dave Byers rode a killer race with the same start smart finish fast philosophy and rode it all the way up into 3rd place on the podium. It was awesome to see him come through the pits when I was on my rest lap. 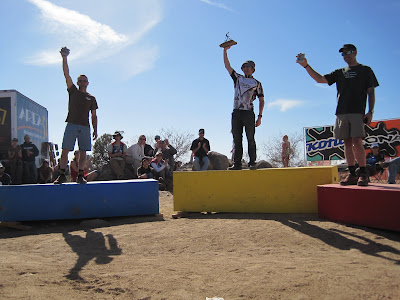 We had great mojo in our pit!!

Dave Harris stayed in the game with text updates on the race from home and Scott’s SO Paula came on Saturday evening to do support. Paula didn’t think she did much for me but we had some awesome night time smack talk going sealed up in our circus tent which stoked the fire ;-)

From a coaching perspective it was a massive success too with nine LW Coaching athletes on the podiums – I was really as excited about that as my own race. 9 podiums is a lot of race stories now to relay. My jaw dropped at the awards ceremony as so many got up there on the podium. What a fine coaching moment for me.