I raced the stage race format of Coconino 250 Oct 5th – 8th. Quite a bit off the back with this blog post but life has been moving fast since then!

I am taking a motorcycle repair class at the local college. I didn’t want to miss my Thursday evening class so I decided to drive to Flagstaff on Friday morning and start late on day 1. In retrospect I would make a bigger effort to make it to the recommended start time. I missed out on meeting and visiting with everybody before the start.

Stage 1, finish time 6:35. The 5 hour drive from home to the start plus the riding felt like a long day. About 5 hours into the stage I finally admitted I was feeling really bad. I felt like I had a fever and no power. I couldn’t eat. The only calories I got in were some unflavored Tailwind sports drink I was testing. That stuff got me 5 hours in before I cracked. I got off my bike, sat down and quit the race. I was sick – bleh. DH had been sick most of the week and I hadn’t been feeling well all the day before but was in denial. I was low on water so I got back on my bike and rode up still on course to the ADOT water spigot. I lay down there for a while contemplating my options. I could hitch hike back to Flagstaff and get a motel – bleh. I could ride up to camp 1 and sleep there as it wasn’t far. I did that. I felt awful but was stoked to get to camp before sunset as it was tremendous.

Here is me feeling like I have the flu. 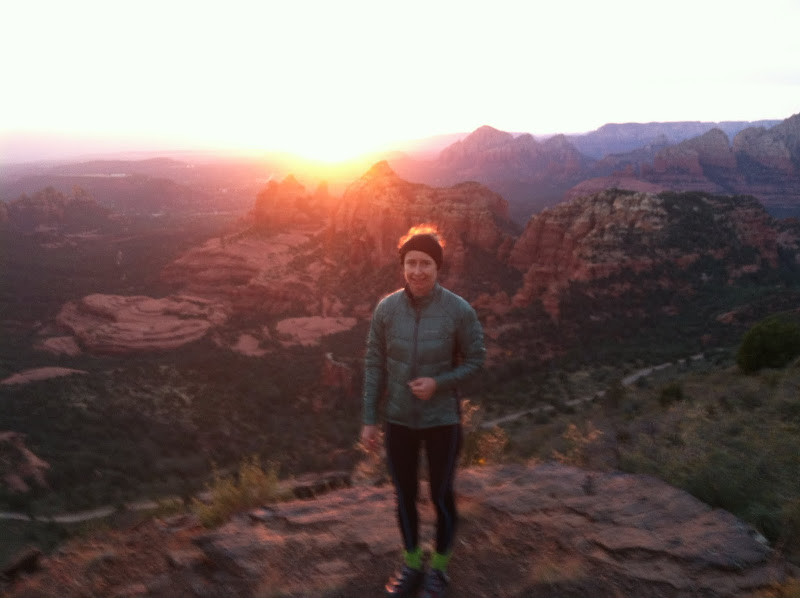 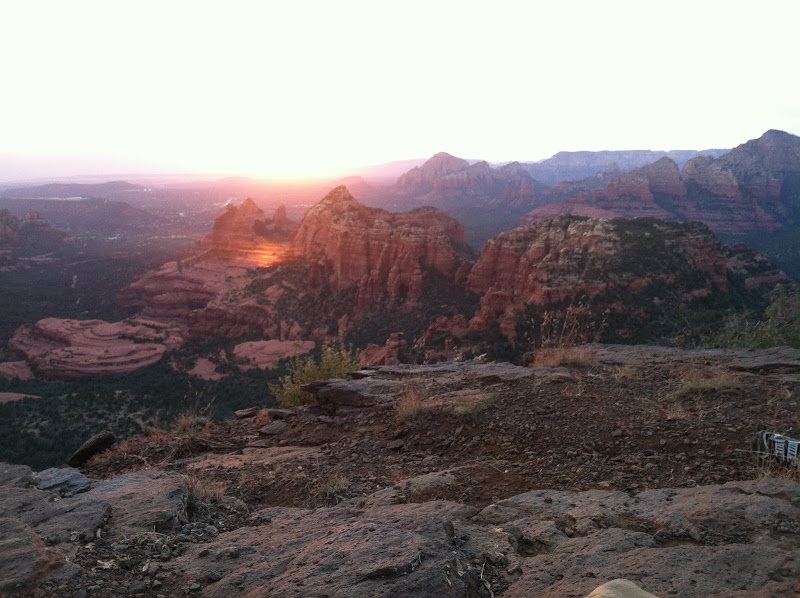 The sun set over Mingus mountain which was the end destination for stage 2. 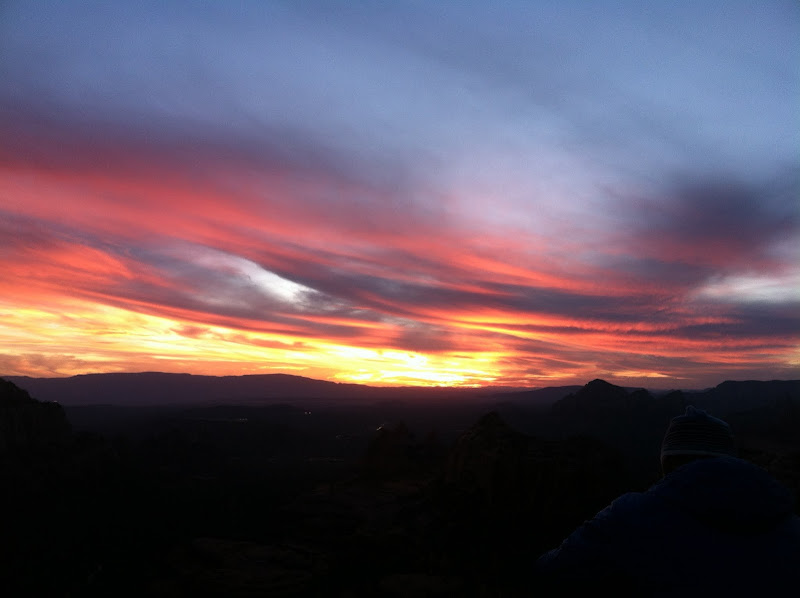 Stage 2, finish time 11:00: I slept hard all night and woke up after the sun had risen in the morning. I was really hungry and had a good chow down. I hadn’t eaten much the day before and had a lot of food left. I felt pretty decent so decided to continue on with the race. I hadn’t strayed off course so my quitting and unquitting was all in my head!

I bombed down to Sedona and skipped all the resupply points because I still had so much food left! Keps’ Balls are my magic ride fuel.

Sedona was going to be a challenging day as my GPS was not working and I had been confident enough in it that I had not printed out any cue sheets – oops – lesson learned. I was slightly familiar with the route from prior riding in Sedona. I caught up to Michael Braun and had a blast riding with him for a couple of hours. Up to that point I had been riding lazily as I wasn’t feeling very well. Michael was rocking the technical trails, he has skills! I picked up my pace to follow him. It was much faster than I had been riding, woke me up and was very fun.

We parted ways on the Lime Kiln trail when Michael decided to stop for a snack and I decided to hightail it to Cottonwood to find a bike shop before my rear tire exploded. I noticed in Sedona a missing knobby and a slash in the sidewall. This race was turning out to be a comedy of errors on my part! I had been riding this tire since early May and I raced Grand Loop on this very tire. Lesson learned – get some new tires before a 250 mile race – that was a lazy/cheap/dumb move for me to race on an old tire. At least I had refreshed the Stans and I made it to the bike shop without a hiccup. 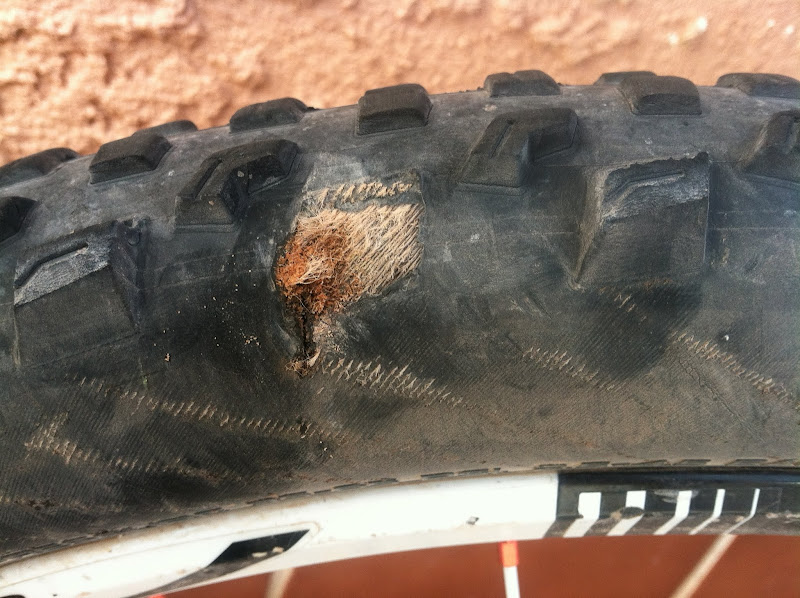 However the bike shop was closed. Drats… I pondered my next move when a guy rolled up in a truck with a bike. He was a friend of the owner and called him – no answer. Then another gentleman rolled up on a bike. He had keys to the shop Sultana Cycles. He let me in and I helped myself to a new tire, stans, and their air compressor. I was stoked to get a WTB TCS tire which I have had good luck with in the past. I gave him all the cash I had and an IOU note to the owner. They were so nice to let me bust into their shop and help myself to what I needed!! Thanks Sultana Cycles.

Next up I hit Safeway, bought way too much food cause I was still hungry and rolled out of town with happy new rubber on my rear wheel.

The ride up Mingus mountain road was super and I looked forward to the single track part. The single track was unrideable and a stupid place to be with a bike. It was a drag. It was hard to hike even. Loose footing and big ledges led to my only crash of the race – a hiking crash! I heaved my front end up a ledge but the bike didn’t stick on the ledge and rolled back down again. The momentum of catching my bike pushed me backwards down the trail. As I tried to stop it, my left foot slipped into the air, off the edge of the mountain, my ass quickly followed along with my head and bike. We tumbled down about 20 feet off the edge. I came to a stop sitting up looking down at a nice view of Cottonwood in the valley with my bike on top of me. I was grumpy getting my loaded bike and myself up out of that mess of scratchy bushes and back on to the trail. No real damage sustained other than a significant dent to my friendly demeanor.

I arrived at camp 2 at the top of Mingus mountain as the sun was in the tops of the trees and the air was starting to cool. Ray had a nice fire going already and it was very welcoming. I liked that a lot and the suffer of the hike-a-bike faded. I had a ton of food still with me so I decided to eat as much of it as I could because I was tired of carrying it. I think I ate 2 dinners before sleeping that night.

Stage 3, finish time 10:12. I felt the best of the race so far. No flu and good legs. I started after most everybody else so I had lots of tracks to follow. I was having fun following tracks and navigating using the “force” seeing as I didn’t have maps, a working gps or cue sheets (that would be a triple dumb…). I missed out Coyote spring because of this however this turned out to be a dumb luck move as the spring was yuk green with a dead rat floating in it I was told later. I got a few Stans showers off my front wheel as it shed goat heads. I was glad I put in a double dose before the race and some extra at the bike shop in Cottonwood too. Stans is amazing stuff and it plugged up everything. Never ever ride in Arizona without it.

I filtered a full load of water at Verde River, visited with Jay, Keith, Les and Jill and left with a belly so full I was burping for an hour. I felt great on the climb out of the Verde river valley. I love to climb and it was hot – just how I like it. I went back and forth with with Keith a few times, then for a while our pace matched and it was nice to chat and ride. Keith stopped and I didn’t. I only stopped one more time that day for a little sit down and snack before the finish. The trail up and down Bill Williams mountain was surprisingly rideable and enjoyable.

I rolled into Williams and ran into Dave See, Ernesto, Dave and Michael all checking into the hotel opposite Safeway. I did the same. Safeway deli served up a very nice dinner.

Stage 4, finish time 8:11. I thought staying in a hotel would make getting going the next day easier but it was quite the opposite. I was less efficient with my stuff spread all over the room and the bed was warm and comfy! I started out much later than I had planned. My GPS had started working again after I dropped it on the bathroom floor in the hotel. I put the cues on my iPhone and I had a map and track on there too. Things were looking up for me to actually finish this event!

After some flat roads out of Williams stage 4 hit Sycamore Canyon. Wow! This was the race highlight for me. So pretty. 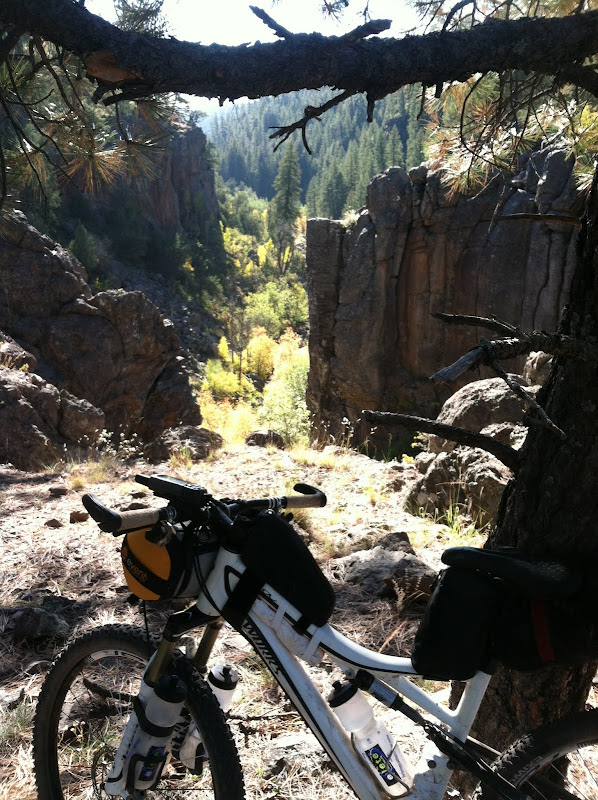 Any remote semblance to racing vanished and I turned full tourist. I took photos and hiked out to every view point to look down into the canyon. The trail was super fun too. Tech enough to be interesting and easy enough to stay on the bike. Perfect. 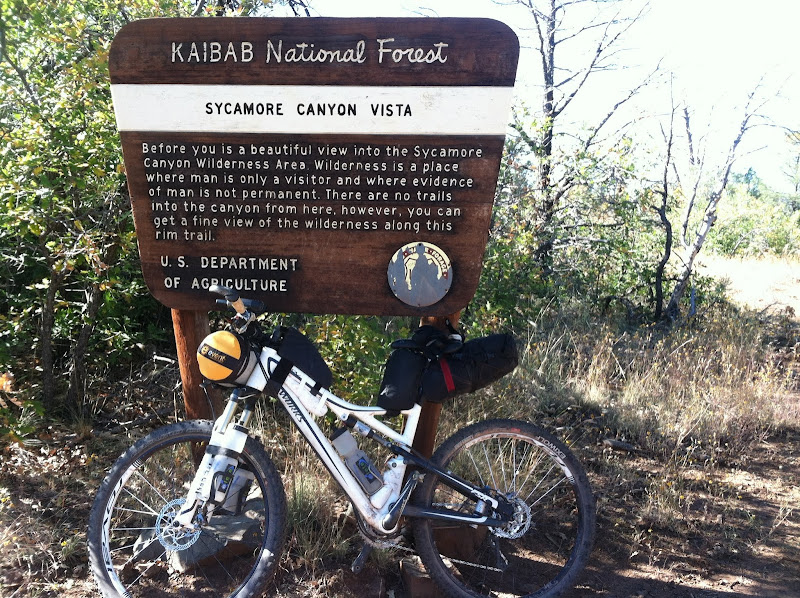 On some flat roads after Sycamore canyon I caught up with the California crew of single speeders, Ernesto, Dave and Dave. We had a casual stop at the Texaco with Jay sitting in the shade chatting for a while. Jay set out then shortly after I rolled off while the CA boys were still relaxing. Then my GPS stopped working again and I rode off course again – gah. I made lots of wrong turns but figured most of them out thanks to a nice set of Specialized Captain tracks. When I couldn’t see the Captains I knew I was off course. Having the cues this day helped a lot too.

Just before the final descent was a crew of Coco racers who had dropped out of the race for various reasons cheering – that was pretty cool. Rich Wolf took this great photo of me and caught me in my happy place. Just 5 miles of super sweet descending on the Arizona Trail and a few wrong turns were between me and the finish-line. I was actually going to finish this one despite my far from perfect execution. 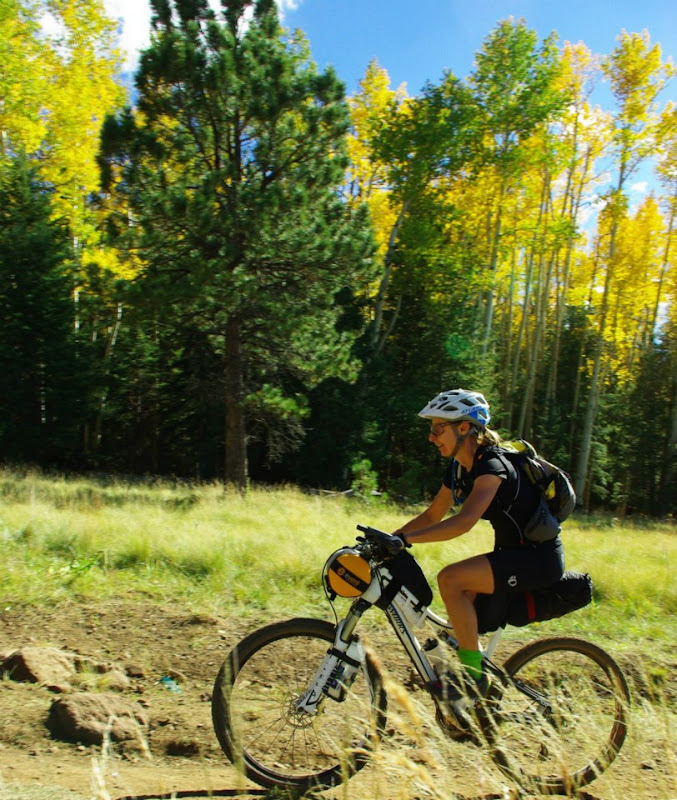 Race results are here. I set a new female course record of 35 hours and 57 minutes.

I do recommend this route and race even though the hike-a-bike up Mingus mountain is ridiculous. Beautiful scenery the whole way and the final descent is such an incredible grand finale it is the best finish prize I could ask for.