No call in from Marshal. His Spot slowly and steadily travelled up the 4.6k climb from Summit to Brian Head all day today. Then it shot straight back down the pavement to Parowan – the opposite direction of the course… So I’m guessing Marshal called it.

Dave called in from Brian Head. He rode StG to Cedar City, stopped at a grocery store then a motel for a shower and snooze then continued on to Brian Head arriving mid-morning. He is continuing on with the hope and slight chance all the forecasts are wrong and the storm will stay north. He said it was cold and windy but clear.

Here is the forecast for the Paunsaugunt Plateau. He will be there tonight and only with a nutty effort and no sleep will get over it before noon on Saturday when the rain/snow is supposed to start falling:

Tonight: Mostly cloudy, with a low around 43. Breezy, with a west southwest wind between 22 and 28 mph, with gusts as high as 41 mph.

Saturday: Rain and snow showers. Some thunder is also possible. Snow level 9300 feet. High near 50. Breezy, with a south southwest wind between 17 and 22 mph. Chance of precipitation is 90%. New snow accumulation of 3 to 7 inches possible.

The high point of the TU route on the Paunsaugunt plateau is only 9061 ft. It’ll look real purty with a dusting of snow… 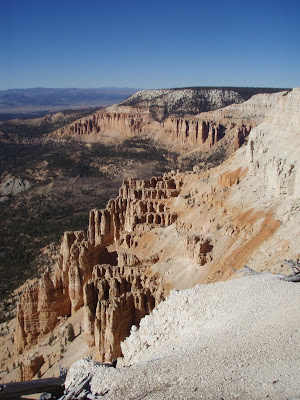 After the Paunsaugunt the course drops down to Tropic at 6500 ft then whoosh back up towards the sky for scads of time over 10k over the Table Cliffs Plateau and Powell Point. 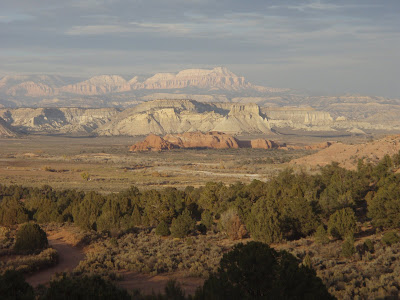 Dave might be the only one left pedaling but he seems to have a race on his hands.