My legs were poopy today after a zippy and fun group ride yesterday (read: I drilled it ;-) Dave got back in town after a week in New Jersey and needed an easy detox ride. Today was just a short ride in the Bear Claw/Zen trail zone. Short but awesome – lovely day. 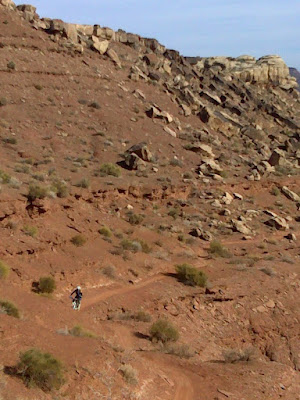 That left the afternoon open to finish up Wesley’s new mountain bike. It came like this a couple of weeks ago. 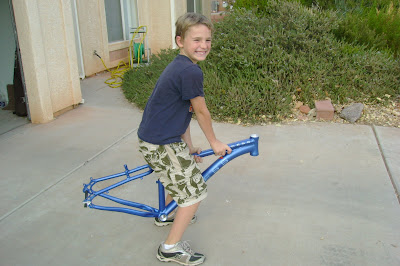 We spec’d it entirely from spare parts. Other than the frame the grips are the only other new parts. The green Ergon grips look sweet with the blue frame. 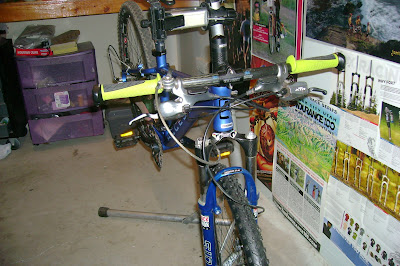 Dave pulled this blue SID carbon world cup fork out of his garage! It is perfect. He gets some stick for the “mess” in his garage but it is full of goodies.

Wes’ new ride has a 2005 XTR gruppo, disc brakes 26″ wheels and tubeless tires. It is rad!! Finished up it weighed in at 22 lbs!! We are going riding on Thanksgiving Day – look for ride pics coming. 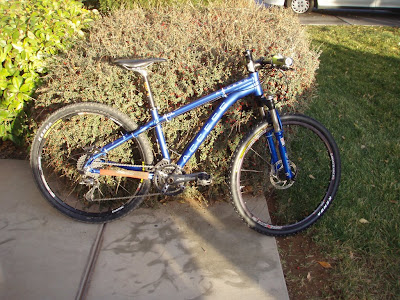 When I was 9 years old (Wesley is 9 yrs old now) my parents were really into sailing. They were competitive and raced Wayfarers.  They bought my two sisters and I our own boats and we raced too.  We had Mirror – looked like this and a Topper.  I sure didn’t appreciate how awesome that was at the time. They put a ton of work into setting up the boats and all the kit you need to be safe and warm sailing on the North Sea. Back in those days (um… I was 9yrs old in 1979 so we are talking the 70’s here!!!)  you couldn’t buy wetsuits small enough for kids so they bought neoprene and made us them! Then we were set loose on the sea all day. We had a blast, learned lots, got epicked, raced each other, learned how to sail and the finer points of how to sail fast, how tides and winds shift and work, we broke things, fixed things, got hypothermia (once), saw a real live seahorse swimming in the sea (once) saw real live sewage swimming in the sea (many times) and saw a real dead guy floating butt up in the water (once), capsized our boats (many times) and got them upright again without help (most of the time), got our masts stuck in the mud, dared each other to jump off the end of the harbor…sailed out to islands no one lived on, found things on said islands. We had adventures.

Giving Wes a bike 22lb bike set up with a carbon SID fork and XTR seems really small peas compared to that and he has way, way, way, way more parental supervision than I ever had… but I hope he has his own adventures and has some of them on this bike.

I did goof tho…what on earth am I going to get him for Christmas now???

6 replies on “Sunday Wrenching and Retrospective”