Every time I race OP it seems to be all about testing.  26 vs. 29 anyone?  How about the latest and greatest lights?

This time around is no different.  I’ve been impressed with the Ayups since seeing them at 24 hour worlds in ’07.  They are now making them with Cree Q5s or R2s which are quite bright and efficient, so I had to get a set.

They ship with an on/off switch.  They are on, or they are off.  I like a bit more control than that, plus I’ve got so many batteries it made no sense to collect a bunch of Ayup batteries.  So, I made a little gizmo that runs 2 sets of Ayups from one of my batteries at 12 hours on high – both sets, one battery.  Should be 640ish lumens to go along with the bar light.

Nuthin like going with an untested setup in a race.  My fingers are crossed.  Of course the real question is will there be another end of the world storm?  It always rains in the desert for races it seems!  Oh well, SS’s keep truckin in that stuff. 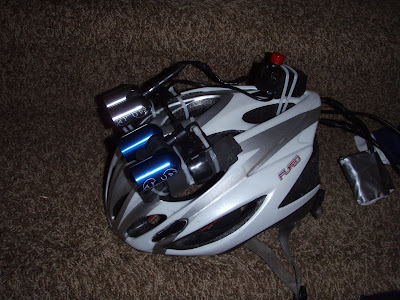 I’ve got a dozen or so 14.8v Lion batteries at 2600-5200mAh.  I’ve also got a couple bFlex units on hand.  The bFlex is a constant current voltage stepdown unit that works perfectly with my old light systems.  So, to use my existing batteries (that also have ~4x the capacity of the Ayup 6 hour battery) I wired the bFlex with a switch into a piece of aluminum square tubing.  Wires in = battery; wires out = 2 leads to the Ayups.

The bFlex is set at 1000mA and the Ayups are wired in parallel – so each one gets 500mA, the same as what they are shipped with.  This is, however, well below their rated capacity.  All my Cree lights run at 1000mA no problem and the Ayups probably will too so long as they are moving.  Stationary they probably don’t have enough cooling for those currents.  I’ll find out eventually – with this setup I can also run a single unit at 1000mA and that is considerably brighter than the stock Ayups.  The advantage is weight, of course, the disadvantage is the Crees get less efficient at higher powers.

Matt, thanks for the heads up.

I release all rights to this concept but am not responsible for on-helmet meltdowns :)