In ’06 we killed TR.  It was the season’s #1 goal.  Coming back for the second time we had no such ambitions.  In fact, our sole goal was to finish.  Of course, we were riding SS bikes – and to my knowledge a 7 day stage race has never been done by a woman and not so many guys.  Modest tho it was, it wasn’t a given.  The first day’s route climbed 4k’ out of the gate at an average 12% grade. How in the heck do you gear for that???

The views from that climb were spectacular.  The Canadian Rockies are massive, one range after another that just keep coming.  Trans Rockies sends you deep into the heart of it all. We started way down in that canyon below. 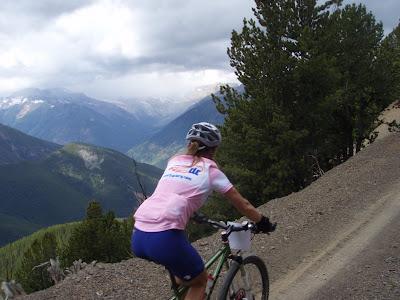 The descent off that high point featured loads of new singletrack on a top of the world ridge. Much of that was hike a bike. It was snowing. You could say we were out of our desert element ;) We started at the back of the field, worked our way to 3rd (in our field) by the top, finished 7th on the day. There were tough moments but overall a good day was had.

Then came day 2. The most bizarre thing I’ve seen in a race….2/3 of the field taking a wrong turn, hiking up an avalanche chute (2k+ vert hike a bike) and then flipping it when the mistake was discovered – this sent head size rocks flying in all directions. A few savvy teams bushwacked back to the route from the top rather than flipping it and made massive time gains on the rest of the lemmings.  Of course, they did miss part of the route too.

We spent a good hour on this hike, maybe more. Head down focused on the next foot placement, nobody noticed the orange flagging off to the side of the chute 50 feet at the edge of the forest… 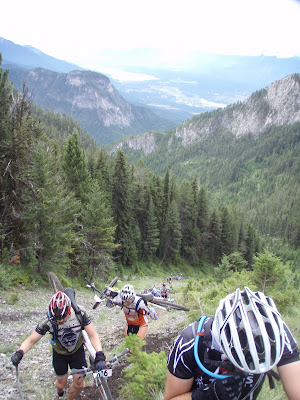 But when the mistake was discovered, faster folks descending merged with slower folks climbing and the field was turned upside down – the back 1/3 of the field had made the turn and entered some slow, largely unrideable new trail. All those faster folks coming down from above stood in line for an hour. Motionless. In a race.

Hestler shouting for his lost partner…Shep, where are you man? 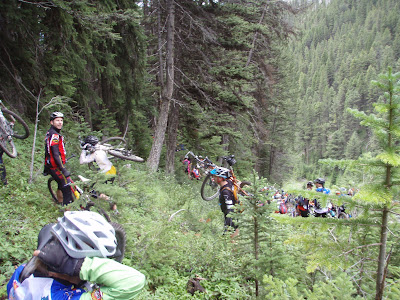 The entire scene was hilarious.  It was obvious to me this day would not count towards the GC so we took it real relaxed the rest of the day.  Gottta keep our eye on the prize – the finish.  We even had a couple of picnics.  Some flatish downed moss covered logs beconed and we had a little snack while cheering on other riders.  Thing was, the hiking plus SSing super steep terrain had done some damage…we were feeling the effects already and the finish was anything but certain at the end of this day.   Can you say achilles strain?

Canadian Stick boy and Mike Garrigan were one of the finest teams in the event.  Super strong, positive, these guys were a lot of fun to hang out with at the race.  They pulled the win day 2.  Too bad for them it didn’t count on GC, but they did get the stage win.  Congrats fellas. 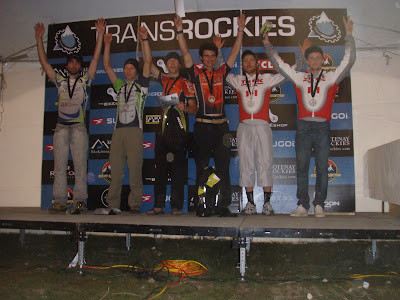 Day 3 we entered the fantasy world of Nipika resort.  Deep in the middle of nowhere but there…trails to die for, a late start team time trial format and lots of time for eating, sleeping, relaxing.  They nailed it with this easier day. 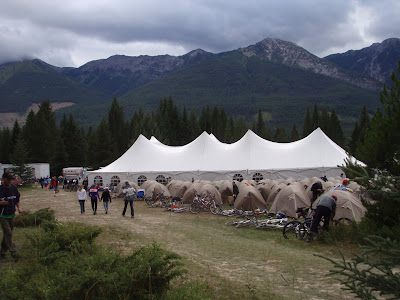 Even our bikes looked happy in Nipika. 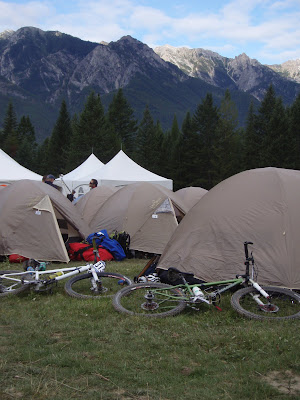 I’m pretty sure we had the longest bars of anyone there. Certainly the fewest # of gears ;)

We did not get the honors of the most difficult bike though, that went to Gina and Phil. 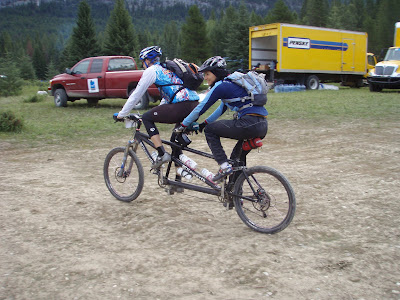 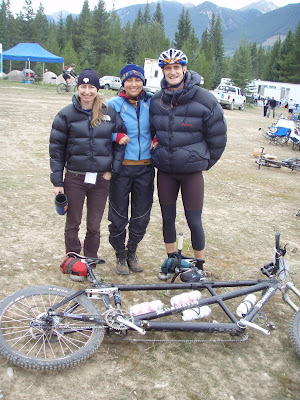 The time trial day 3 went ok for us. It was a perfect course for SS riding, but we were still coming around from the efforts of the first 2 days. Steady was the name of the game, and we completely enjoyed the individual start. Starts on a SS really suck in big fields of gearies and I doubt either of us will do that again. The individual start meant we had our little bubble for the whole day and we made the most of it.

Strategy. Um, yea. Lynda was the one with the goals of just to finish, but I knew she would be kicking some butt from day 4 forward. She always does. My secret hopes included 1 trip to the podium during the event. Her mojo was rising day 3, it was obvious (to me) what was next. It wasn’t obvious to her, and when I started talking about “racing” (remember, we were just trying to finish this beast) she didn’t like it at all. So, I just zipped it, said nothing and would let nature take it’s course. A perfect plan ;)

Day 4. The start was not so unfriendly as the first 2 days for us. On the first climb we had a clear view of 4 mixed teams at one time and all the gals were being pushed by their guys. That was a red flag to my firebrand partner and we were off like a shot. It wasn’t long before we caught the 2nd placed mixed team Luna (Steve Wallace/Katarina Nash) and we yoyoed with them a bit as they surged to keep pace and the terrain rolled. On the next climb we left them and put in a solid effort. It was a beautiful climb! River crossing, new singletrack, big climb ending in hike a bike. We were having a great day…and suddenly riding with folks we usually only see at dinner time as Dicky likes to say. On day 4 we passed all the leaders jerseys aside from the Italians. 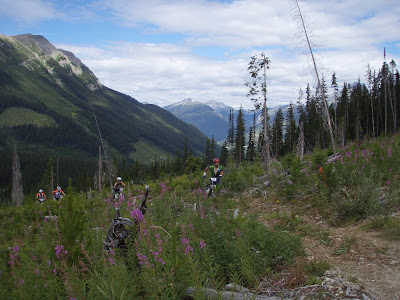 From the top of this climb was a 45 km downhill dirt road. Ugh. Could we possibly hold off the Luna juggernaugt for that distance? We didn’t know but we were gonna give it a whirl. There was no way to hold on to passing teams draft with our gearing. But, there were some sections of rougher terrain and towards the end even a slight headwind – both favorable for us. It was amazing to be passed so few times. We were in the top 20 overall and I was certain we’d be passed by 20 teams on this section. Towards the end Lynda says “I see purple!” I say “no way” (purple is the color of the mixed leaders jersey) but sure enough there was Norm and Wendy fixing a flat. They were super positive as we went by at 180 rpm, telling us we were hauling ass. Our virtual lead lasted all of 68 seconds, they came flying by in their big rings as we knew they would. We were still working it for all we could to hold 2nd…which we did with 10 min to spare. I was shocked when I saw the splits. Best of all, we rocketed up to 3rd on GC on that day’s performance – and we were just getting warmed up.

Day 6 looked like a real toughy, so we decided to take it easy day 5. Easy being a relative term on a SS, we still rode right up to Luna on the first climb. I was a bit ahead of Lynda when that happened, and I didn’t want to get into a dog fight with them today so I got off the bike and whipped out the camera. 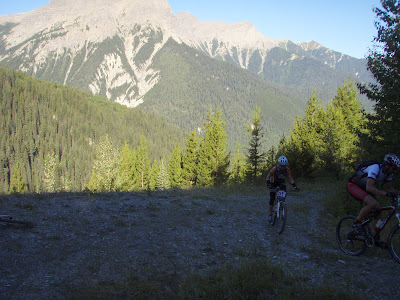 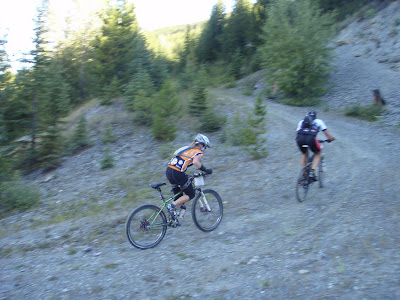 An enjoyable cruise that day, and without working very hard we landed 3rd.

Day 6 had something over 12k’ vert, a paved uphill start, big climbs and some elevation – we figured it would be favorable for us so we hit this one hard. No camera in tow this day. It was funny how the initial fatigue days 1 & 2 had us wondering if the finish would be attainable, and the eve of day 5 we were deep in 2-epic thinktank strategic mode. It’s definitely one of the things I love about us :) We are happiest when racing. As we were flying up the first big climb we both recognized that no matter the outcome of the day we were living large, it was a day to remember. We did give this one our all. As it turned out the route wasn’t as favorable for SS as we thought – lots of spun out stuff in the middle after racehorse pass and then some stuff just a tad too steep to ride with our gearing at the end. But when I saw the splits, that we were only 13′ adrift of Norm/Wendy on a 6 hour day – riding SS bikes – well I was ecstatic. Our teamwork this day was top notch and we dug deep into the well. It felt great at the end of the day.

Until the awards, that is. We were passed by a mixed team in the last few miles but since she didn’t ride the first 2 (hard!) days after getting food poisoning, forcing her team into the unclassified ranks, we didn’t imagine they would be reclassified after she rejoined the race. But alas, it was a Canadian team…so we ended up a dissappointing 4th on the day.

Day 7 started with some nosebleed steep climbs and hikes, featured endless rolling roads in the middle, with a touch of sweet singletrack for the finale into Fernie. We didn’t ride hard at all this day, all we had to do to protect our 3rd GC spot was a consistent ride, and that’s what we did. We were both a bit tired but would cheer each other up by noting that we were gonna finish this beast – on single speeds.

Does this gal look tough enough to SS TR? 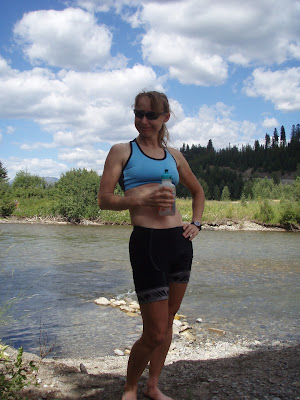