Make no mistake:  the TU route is a monster.  With limited time, knowing storms were coming in quick, I gave it what I had left for ’08.  Somehow, after 242 miles and 32,000′ climbing, it still feels like a whopper of a ride.  And…I only just started the really fun stuff.  The late addition of the Cedar City section really changes the nature of the event on many levels.

All I can say right now – if you are interested in this event come with game.  It is physically demanding, moreso than GLR.  Based on info from my GPS ride file, the shared track under-represents both mileage and elevation gain.  The StG – Escalante section will play out closer to 400 miles and 60k vert.  Yea, no kiddin’.

That said, it isn’t as remote.  There are 2 restaurants about a mile off-route in Virgin, everything you could need in Cedar City, a good general store and some restaurants in Brian Head – then things get spotty.

For those areas with spotty services, you may need a bucket to haul enough stuff. 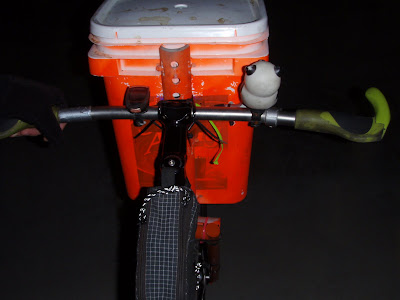 Let it be known that Dave Nice came prepared with a GPS and a cycling computer.  Gears and freehub can’t be far behind. 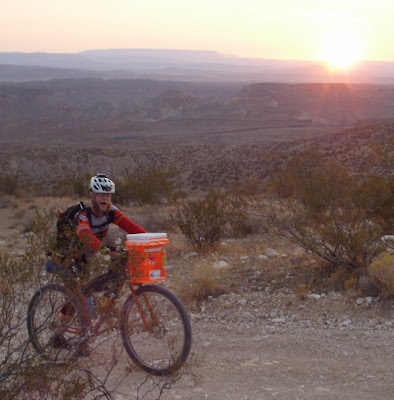 Moving this thing up a day stressed me to no end.  With the last minute course changes and a busy work schedule I had more than I could handle.  Getting out the door in the right frame of mind was not easy.  Funny things happened in the first hour on the bike.  Things didn’t look familiar.  A picture of a coyote laying on the ground, mocking me with his big howling laugh….shortly followed by a sea of bleached carcass remains was more than unsettling in the darkness.  Where was I??  Only a few miles from home, I hadn’t been looking at the GPS track cause I knew the route like the back of my hand. On top of this weirdness, my legs had no PE whatsoever.  It was too easy to punch big power on the short rollers.  I’ve been here before – a bizarre mental state combined with no PE – and it’s dangerous.  This is the first time I’d recognized it mid-ride though.  I started following that GPS track and kept it super chill.

The AZ strip went by in a blur. 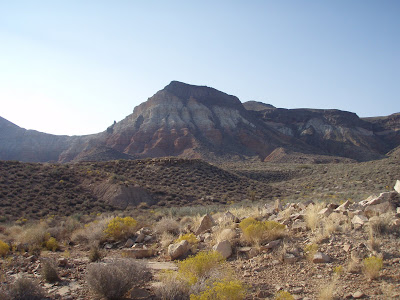 Coyote springs was in fine form.  I still had plenty of fluids so kept it rolling. 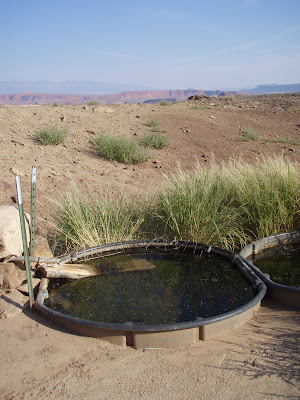 The climb up the Hurricane Cliffs via the Honeymoon trail was exhilarating as always.  It started to feel a bit warm here. 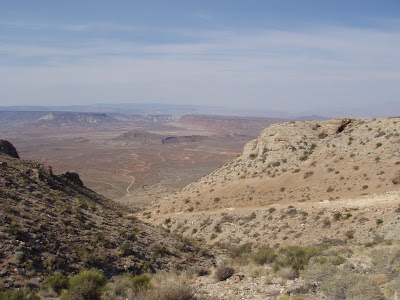 Some fast cruising roads between the Hurricane Cliffs and Little Creek Mesa head to the Goulds/Jem trail section.  Starting Goulds I got that empty camelback slurp – dangit, only one bottle left.  Water conservation mode notwithstanding, Goulds and Jem were awesome.  I did pack a bit more gear given the weather forecast, so this gave a good feel for how the bike would handle in the tight twisty stuff from Brian Head and beyond. 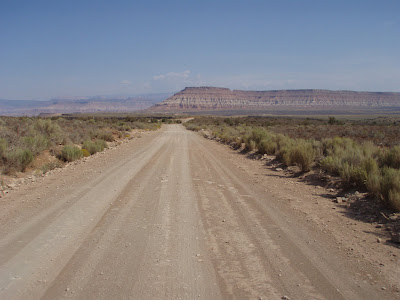 40 oz. Coke, ice cream, and iced bottles/bladders and the climbing started in earnest. 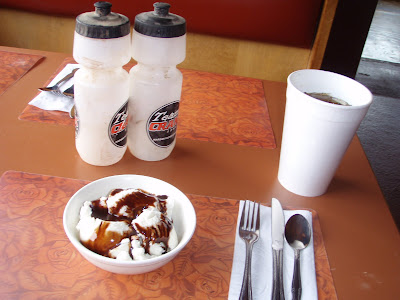 Smith Mesa and Kolob roads held no surprises.  With 80 miles in the legs and on a loaded bike, it was slow going uphill.  Darn nice views all the way though. 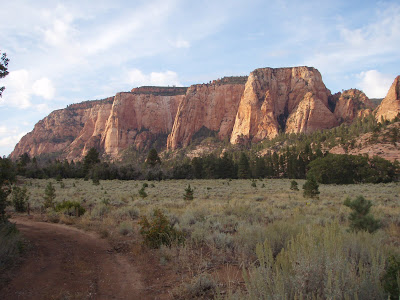 Just N of Kolob Res I ran into Marshal.  He was setting up camp for the night.  I had secret hopes of catching up with him a bit later so we could tag team a hotel in Cedar…all morning through the AZ strip I’d notice we always took the same lines through rocky/tech sections.  A few times my mind would wander and I’d find myself following his tracks on auto-pilot.

Next up:  the big new section of the course.  I’d heard of the C trail but never ridden it.  I think it drops 2400′ in 4.7 miles, super fun stuff and even better at night!  I hit Cedar at 11 PM, rolled right up to Albertsons (blind luck), got a room and slept for 3 hours then moseyed on along.

The climb from Summit is steep. 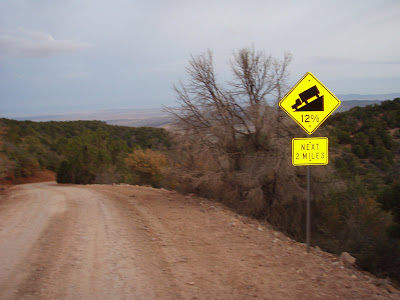 What that sign really means is mixed grades of 10-20% for the next 4 miles ;)  You do get the elevation quickly though.  It wasn’t long before I was up in the aspens.  It’s peak color time right now. 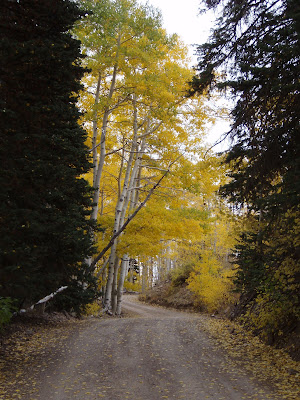 I never called in from Cedar cause I got in late and left early.  Brian Head, so far as I can tell, has only this one pitiful pay phone.  This has got to be a big issue on GDR – crappy, failing pay phones as everyone on the planet now uses cell phones.  Anyway, I called Lynda.  We couldn’t hear each other, all I could make out was “1-3 inches”  then the line went dead.

Was it game over already?  I wasn’t sure what to do.  The route stays high for the next good long while and I was not in the mood to get stuck in snow.  Taking a nap is never wasted time…

Tried Lynda again after a nap and a quart of coffee – she said it was moving in tomorrow so go giv’r.  Sweet!  I was really wanting to do the Marathon trail section.  I’d never seen it.  Tough initially, from the middle of Color country to Louder ponds was pure bliss.  Singletrack heaven. 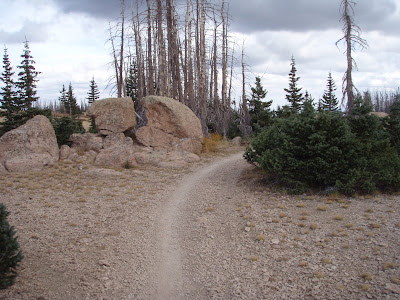 A long section was used in the BH Epic 100 route and also the recent American Mountain Classic.  There was still a lot of crap left by both racers and promoters.  TBB left like they weren’t coming back ;)

The Marathon trail ends at Navajo lake with a wonderful plunge down steep, wooded singletrack.  It was so unexpectedly bitchin! 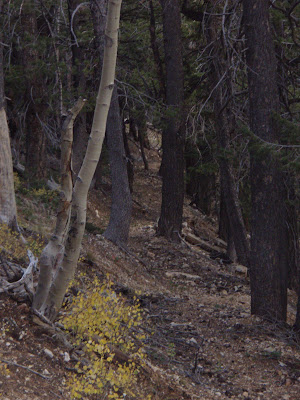 Wild country.  I scared up some big elk, a skunk with tail raised high, smelled (but didn’t see) a bear, and then almost nailed this on the trail: 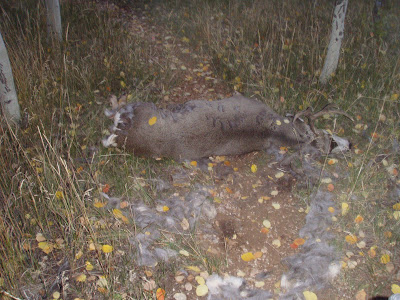 Next up was the Virgin River Rim trail, just as the sun was setting.  Didn’t it just rise??  Days are so short in October.  I was really hoping to make it to Tropic.  I had 4-5 hours to reach the entrance to the Paunsaugunt, then would have to cover the next 60 miles in the dark and wee hours of the next day to make it – assuming the forecast for rain/snow at noon to be correct.  Well sheet.  Even in my addled state it was obvious pushing into the Paunsaugunt was a recipe for SAR.  I would get so pinned down up there and bailouts from there are not simple, easy, like they are from VRRT.  So, I camped near the end of the VRRT section.

It was a damn fine descision as the storm moved in a few hours later.  It came in fast, howling winds, and surface conditions became unrideable in short order. 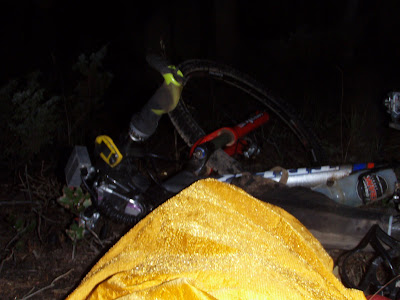 I had my bailout plan already figured out before I slept – it didn’t phase me.  I just zipped up the bivvy a little tighter ;)

After a relaxing breakfast, copius coffee, hot soup and other goodies 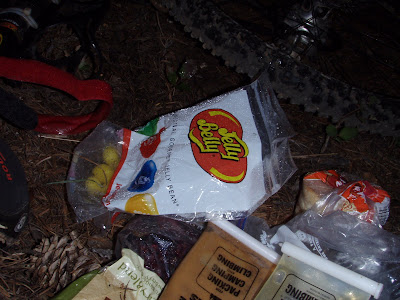 it was time to make the escape.  The show was over and it was time to bail.  It wasn’t bad really.  I wore motorcycle goggles (honest!) for night riding and they worked a charm in the wet and muck.  It took about 90 minutes to get from camp on the VRRT to the Long Valley store.  A heaven on earth with Krispy Cremes and warmth.  Lynda braved her way over the snowy roads to haul my stinky butt home.

So, 3 starters and zero finishers – but the stats are weather impacted.  It’s doable.  It’s tough to imagine a sub 4 day finish, that’s for sure.  Tour pace is a week or better.

How about timing?  Late June is the earliest potential date, but conflicts with GLR and/or CTR.  August, we’d die in the deserts.  It cools off to 80 at night for about 10 minutes.  Sept is 24 hour natz (which I will target next year) so that’s a no-go.  2 possibilities come to mind:  July 4 or early Oct.  If in July, we’d want a GLR style evening start.

How about the route?  Well, there will be no Escalante – Moab route revealed until somebody finishes the first part!  Next year, same route.  The long term TU schedule just got delayed.  Missed it?  You get another chance.  Abundant pain and pleasure to be experienced.